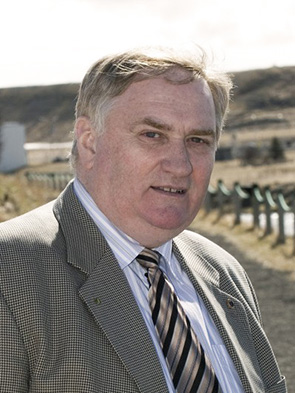 What are the benefits and disadvantages of the reform in Blönduós?
Is it a good opportunity to rethink the municipal structure or an unnecessary process? “It is important to reform municipalities. We need stronger entities to provide basic services for the population, such as education and social services. In my region, there are now four municipalities where there used to be ten. I believe that they should be merged into one municipality because the existing level of co-operation has been insufficient. Sometimes the partnerships are difficult, and the overall interests tend to be unclear because of the limited interests of the local politicians.

Do you think it will affect the sense of local democracy and the sense of belonging to a place?
I believe that merging municipalities has positive effects on democracy. The fear of losing control stands in the way of changes, even though control has already been removed in co-operation between municipalities. In such co-operative arrangements, the power has often been handed to one person who receives a kind of absolute power that is a long way from democracy.

In your opinion, what are the consequences of the reform for the people in terms of public services?
When units become large, you also have to make sure that all areas can flourish. I admit that this varies, but scepticism is probably a more serious issue where smaller communities tend to be suspicious of the larger ones. The smaller communities have often settled for fewer services, but when the municipalities are reformed, the demands increase. The demands can at some point become unreasonable because the same level of service can never be provided everywhere. It is only natural that the service level is not the same in a remote valley as in urban areas, and that cannot be called discrimination. When it comes to the local economy, the pre-merger structure of the municipalities dictates the financial synergies. Management will be more efficient and focused after the reform, and I believe that the interaction and communication with the government will become more successful with larger units.” One of the municipalities’ greatest challenges is managing schools. The minimum number of diverse services is different; a child welfare committee cannot be operated for fewer than 1500 people, and services for the disabled are planned to cover areas with at least 8000 inhabitants. Size preferences for different services make things complicated where there may be a number of smaller municipalities involved. Maybe there would be less complexity with fewer and larger units.

What message would you like to send to the government?
Currently there is no pressure from the government for further mergers. Waiting for something to happen is too expensive, and further merging of municipalities is one of the most important steps for the nation as a whole.