State of the Nordic Region 2020: Wellbeing, health and digitalisation edition 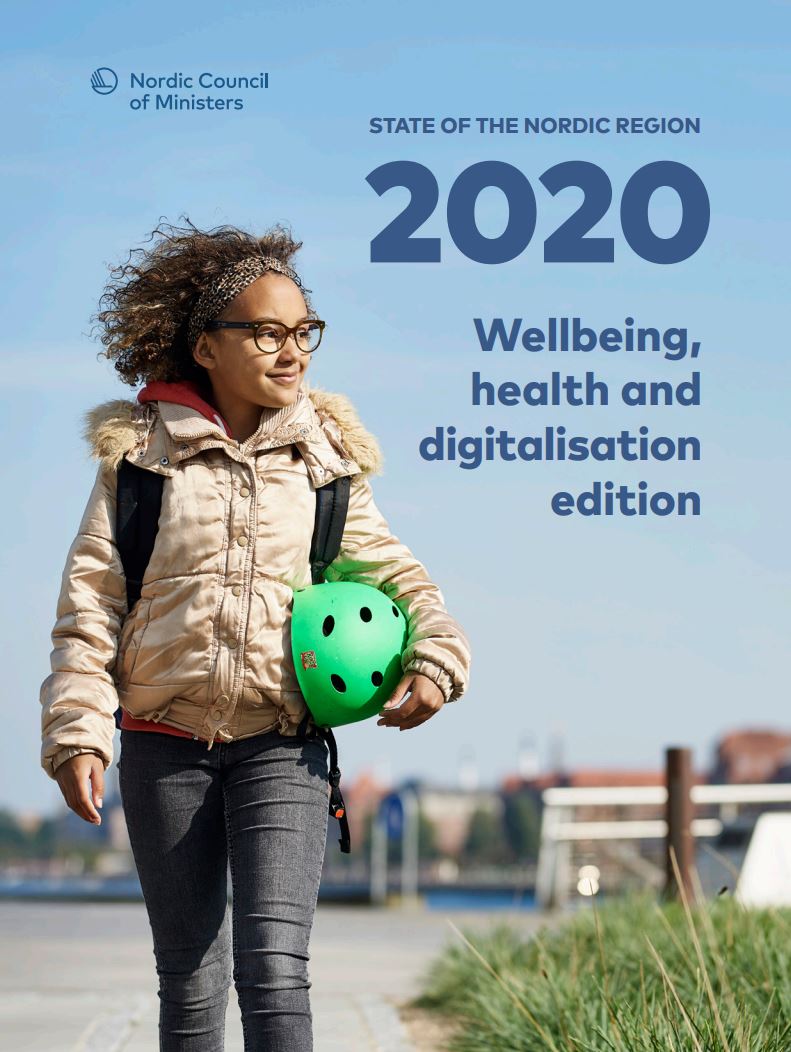 A new State of the Nordic Region Special Issue dives into the well-being of the Nordic populations and the potential of digitalisation to further improve health and well-being all across the Nordic Region. But how do you measure well-being? The report connects the dots by linking health and well-being to demographic aspects, such as population ageing, outmigration and degree of rurality in the area where you live, as well as to classic indicators like education, employment and income. The analysis reveals, for example, that even if women live longer than men, men enjoy more years in good health.

Whilst the Nordics are renowned for their welfare model and universal healthcare, trends such as increased income inequality and difficulties in recruiting healthcare professionals to rural areas have sparked a debate about the social sustainability in the Nordic countries.

“A closer look at the well-being of the Nordic populations reveals that while the overall performance is good, there are important differences across regions and municipalities as well as across socio-economic groups and gender,” says Project Manager Anna Lundgren, Senior Research Fellow at Nordregio.  “Vulnerable groups in society are often vulnerable in more than one respect. To understand how socio-economic differences contribute to differences in health and well-being outcomes, in-depth analyses on the regional and local scales are important.”

Health care spending per capita is above OECD average in all Nordic countries and life expectancy is among the highest in Europe. Meanwhile, the report states that there are signs that more effective health policies, tackling, for example, the relatively high levels of alcohol consumption and obesity, could add to the well-being of the population. Socio-economic factors such as education, employment and income have a positive relationship with health and well-being.

Illustrating these complex links, the report mentions that people with only primary education are more likely to smoke and consume unhealthy food and drinks, which again may contribute to more obesity. This is especially true for low-income groups. Also, there is a clear correlation when people are asked about their self-perceived health. Across the Nordic countries and the EU, people with higher education generally consider themselves in better health than those with lower-level education.

Digitalisation from a rural perspective

“In addition to these traditional indicators, the State of the Nordic Region Special Issue also provides an in-depth insight into the use of digital solutions to seek health information or make an appointment with a medical practitioner,” says Lundgren. She adds that the potential of digitalisation in health care and social care is closely related to major demographic trends, such as the ageing population in the countries.

The report illustrates that a great majority of Nordic municipalities, especially those in rural areas, have experienced considerable outmigration of young adults in recent years who are more likely to leave for the larger towns and cities for jobs and further education. However, there are also signs of young adults moving back to rural areas.

“At the same time, we see that the old-age dependency, which is the ratio between the working-age population and those in retirement age, is higher and has increased faster in rural areas,” Lundgren explains. In rural regions, this ratio went from 27 per cent to 35 per cent during the period 2007 to 2017, compared to an increase from 20 per cent to 24 per cent in predominantly urban areas. “All this adds up to an increased demand for health and care services in our most remote areas.”

Lundgren emphasises that the increasing inequalities in health and well-being in the Nordic countries is not just a simple matter of a divide between urban and rural areas. Digitalisation is however likely to have a more profound impact on rural populations with larger distances to services.

“To ensure that digitalisation of the services provided by the welfare state doesn’t further enhance inequality, we have to ensure good broadband connections all over the Nordic countries,” she says. “This is the foundation for the rest of the services, including the possibilities of implementing new digital solutions in health care and social care.”

The report suggests that Nordic inhabitants increasingly use the Internet for health-related services. This is a general trend across all countries, age groups and locations, but there is still a considerable digital gap between urban and rural areas in this regard. With the exception of Iceland, people living in cities use the Internet to seek health information more than those living in towns, suburbs and rural areas.

Looking at the infrastructure, Nordic countries are well on their way to meeting their targets of providing ultra-fast broadband connections to between 90% and 100% of the population by 2025. Even so, a significant number of Nordic households, especially in rural areas, still lack access to such services.

The importance of a secure and stable digital infrastructure and functional and user-friendly digital services has been highlighted by many of the healthcare professionals interviewed for the report “Digital Health Care and Social Care – Regional development impacts in the Nordic Countries”.

“From their perspective, it’s quite simple,” says Louise Ormstrup Vestergård, Research Fellow at Nordregio. “If the quality of the solutions isn’t good enough, they won’t use them. As a doctor, you simply cannot be dealing with a bad connection or blurred images when conducting a video consultation with a patient. Prioritising good digital infrastructure for all citizens is a basic premise for reaping the regional benefits of digitalisation.”

Improved accessibility and quality of life

In light of the demographic changes, making the best possible use of digital and distance-spanning technologies is more important than ever. Digital infrastructure and good access to quality health care and social care have the potential to enable people to move to and live in rural and remote areas, and digital health and social care may contribute to that development.

“As we concluded in the “Digital Health and Social Care – regional development impacts in the Nordic countries “ report, recruiting and retaining healthcare professionals remains a major challenge for rural communities all across the Nordic Region,” says GIS researcher Oskar Penje of Nordregio. “The increased flexibility that digital solutions offer not only to patients, but also to doctors, nurses, and other healthcare staff raises the attractiveness of the rural areas.”

On 21 October, Nordregio hosted an online launch of three studies on Nordic well-being, health care and digital tools that regions have already successfully implemented. If you missed the launch, we invite you to watch the recording.

Reimagining the future of the Nordic welfare model
Digital treatment removes barriers of distance
How close is the nearest out-patient primary care in Sogn og Fjordane?