What are the challenges for future regional policy in the Nordic Arctic?

Director for High North regional development in the Ministry of Local Government and Modernisation, Norway

And this indicates regions where traditional renewable resource exploitation is taking place. The most dominant colours throughout the map are the green colours. Because the older generation comprise the majority of the population in these regions their mixed level educational background appear on the map of the Nordic Arctic. At the same time the administrative sectors and the vocational training also need a share of persons with mixed level education in order to maintain a welfare society with a certain level of social services. Together this explains the dominance of the green colours in most regions in the Nordic Arctic. Interesting point for the Nordic perspective is that in the Nordic Arctic there are relatively more municipalities with either high or medium level of tertiary educated persons and persons with primary education only – highlighting the lack of persons with secondary education. 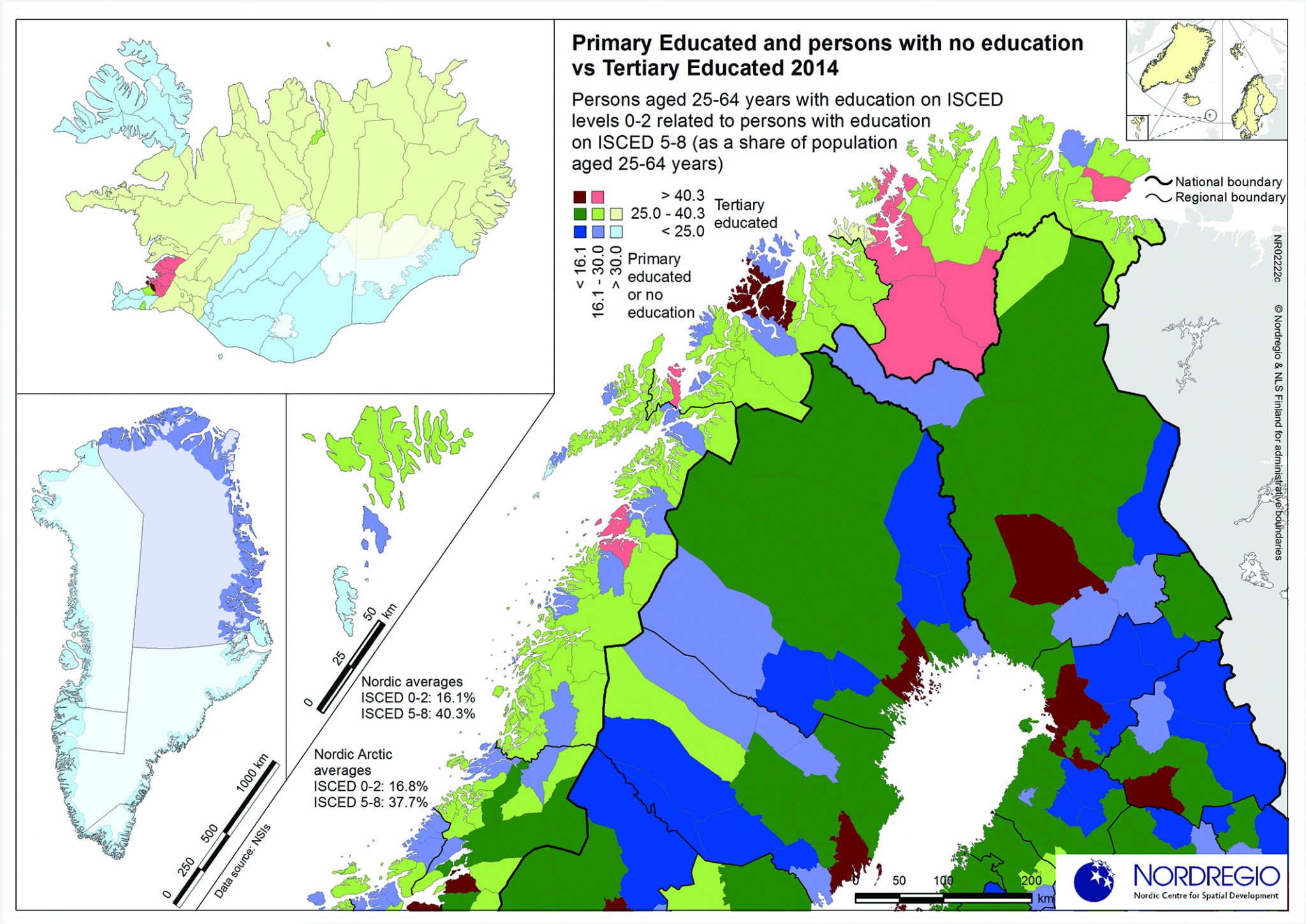 How can we plan for a sustainable future and who should be involved in the planning? The regional policy in the Nordic Arctic faces a number of challenges which has been addressed through a thematic broad and profound study carried out by Nordregio and the Nordic Working Group on Sustainable Development in the Arctic.

What characterise rural communities in the Nordic Arctic?
The diversity among rural communities in the Nordic Arctic is impressive when it comes to social, environmental and economic parameters. From popular tourist attractions to large scale industrial operations based on forestry, mining, or oil to massive fishing businesses and aqua farming to small innovative entrepreneurs building new IT tools or creative entrepreneurs organising big cultural festivals.

Looking at the statistic indicators on demography many communities in the Nordic Arctic regions experience outmigration of young people and women, along with the ageing population left behind, leading to an overall population decline in rural communities. An overview of the regional gross value added (GVA) in the Nordic Arctic shows a high dependence on primary industries compared to the Nordic average. Activities such as fishing, agriculture, forestry or mining are characteristic for the labour market which in some cases makes the communities more economically vulnerable and in some cases make it difficult to attract new human resources adding new qualifications and competences to the local development.

The level of educational attainment outside the urban centres, compared to the Nordic average, is low in large parts of the Nordic Arctic with the exception of northern Sweden and northern Finland. Small cities and communities rarely offer the youth educational opportunities after secondary school. Young people are, therefore, the most mobile population group and the dispersed settlement can be seen as a societal structure giving an incentive for the youth to move at a certain age if they wish to pursue an education.

Many young people explain that they choose education from their interests and accept being mobile as a consequence of their choice.

Harsh climate conditions and for some areas a scarce infrastructure also impact the Nordic Arctic. Among the West Nordic countries there is a high dependency of boat and flight connections and there are no direct flight connections between the capitals in the three countries. For the North Calotte regions the need for an integrated cross-border transport plan supporting the transportation of goods and the airfare running between Oulu, Luleå and Tromsø. An important characteristic of the Nordic Arctic is the indigenous people. In Sápmi reindeer herding is an important activity which often is combined with a growing tourism industry involving museums, cultural events, outdoor cultural sites and places where Sami handicrafts are sold. The tourism in Greenland has been facilitated by Air Iceland opening up a number of routes to a number of locations.

The West Nordic countries are together with Northern Norway also popular destinations for cruise tourism. Big cruise ships with up to 5000 passengers visit small villages for a couple of hours before continuing the fare.

Through the focus on socio economic regional sustainability the objective is to identify the interests and perspectives on future development for communities. The working group has highlighted social and natural resources – both natural, economic and human related – that can be expected to have a decisive influence on regional development in the Arctic over the next ten, twenty and thirty years. The methodological approach towards this is conducting a Foresight Analysis to develop future visions related to the demographic changes, local and regional innovation potentials and development models. The foresight analysis will also intersect and be influenced by local and regional governance structures and a core element is the business development generated by the local participation.

To give the participating communities and regions an opportunity to articulate their future visions a bottom-up approach has been applied. As illustrated on figure XX there is synergy between the fields covered by the Foresight analysis.

What are the implications for future social sustainability?
The results from the Foresight Analysis driven by the ‘bottom-up’ conducted in rural areas of Northern Finland, Northern Sweden, Northern Norway, Faroe Islands, Iceland and Greenland identified a number of issues the local inhabitants perceive to be important factors in their everyday life for their community to thrive. The overall themes highlighted by the citizens’ are infrastructure, education and skills development, job creation and business development and the importance of cultural and social activities.

Infrastructure
The need for infrastructural development varies with the coastal communities often being the most isolated being highly dependent on boat and ferry connections. Lack of an affordable high speed internet connection was also raised as an issue several places. By improving the infrastructure import and export to the outside world will become cheaper and easier.

Job creation and local business development
Many places support to existing Small and Medium Enterprises (SME’s) to ensure a higher degree of value creation locally is highlighted. Supervision and financial support for entrepreneurship is also mentioned of many together with extended opportunities within production/processing of fisheries, forestry, and agricultural resources (in some cases also mineral extraction).

Education and skills development
Distance education and the opportunity to develop skills as part of an employment was stressed. It was also highlighted that educational institutions could benefit from coordinating their programmes and offer complimentary courses aiming to support skills development also in remote communities. It was also brought up that more should be done to improve local teachers’ qualifications as motivators and study advisors.

Cultural and social activities
The value of nature was underpinned among all rural communities together with the importance of having social leisure activities to strengthen the social bonds and network among people living there. Some places had challenges with integration of migrant workers whereas other places had challenges with attitudes and ‘clan behaviour’ causing constrains for collaboration between local inhabitants.

Foresight results and many ways forward
The results of the Foresight analysis will provide examples and insights about the current status of communities in the Nordic Arctic. The results feed into policy recommendations, with the objective of supporting Nordic Arctic communities and regions. The use of the “bottom-up” approach, involving the perspectives of citizens who actually live in the communities, should be particularly interesting for both Nordic and Arctic programmes and other thematic networks and arenas that work with local and regional development.

Community involvement in the Nordic Arctic
Can Foresight actually be useful?
Just being part of it is already useful