This map shows the change in the expenditure in research and development (R&D) between 2007 and 2015 in the Nordic Region. 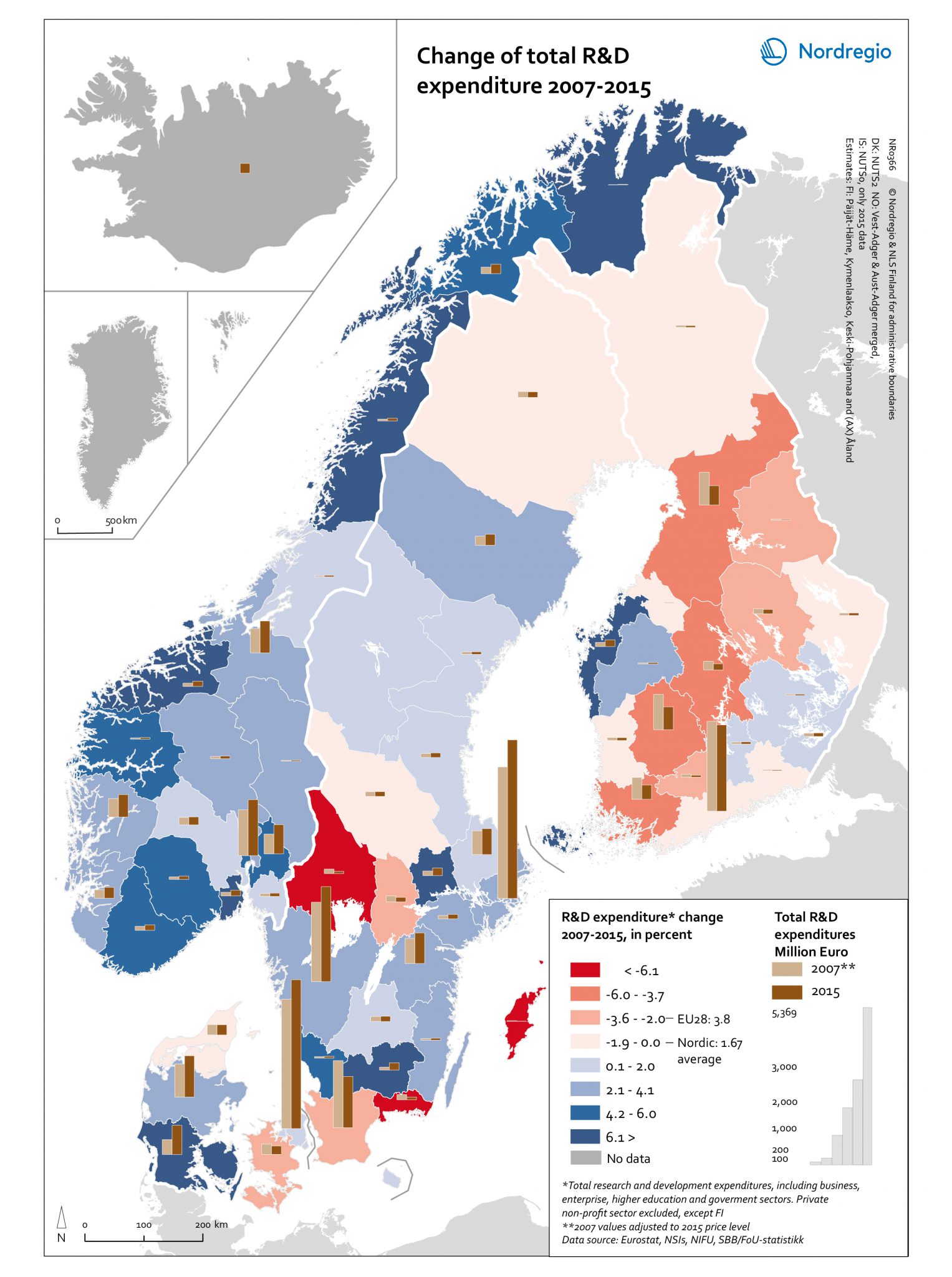 High levels of Research and Development (R&D) expenditure are viewed as a vital enabling factor for innovation which is one of the key policy compo­nents of the Europe 2020 Strategy. At the regional level in Finland, most regions have shown a downward trend in R&D expenditures both in percentage and in real terms. This reflects the chal­lenging fiscal policy and economic conditions expe­rienced in Finland after the global financial crisis in 2008 and the difficulties faced by the ICT sector, where R&D is highly concentrated, as well as the inability of other industries to compensate for the decline of the ICT sector. Åland on the other hand has shown a positive trend in R&D ex­penditures, although having very low values in abso­lute numbers for both years. Sweden has experi­enced a dramatic decrease (< -6.1%) in R&D expenditures in Värmland, Blekinge and Gotland which was in large part, if not entirely, caused by the relocation of important R&D facilities/resources. Similarly, some major closures and redundancy notifi­cations led to substantial cuts in R&D spending in Skåne in 2015, despite the increasing number of start-ups. For Iceland, availa­ble data for the 2013–2016 period indicates a steady and stable increase in R&D expenditure during these years, which for the business sector can largely be attributed to a gradual increase in the R&D activi­ties of a few major enterprises. All Norwegian re­gions have seen an increase in R&D expenditures during the 2007–2015 period. Furthermore, Nor­way’s total R&D expenditure, in contrast to the other Nordic countries, has also been growing dur­ing the period 2007–2015 in all regions but one (Buskerud) when measured as a percentage of GDP. According to Statistics Finland (2017), R&D expenditure as a part of GDP share has decreased continuously since 2009 from 3.8% to an estimated 2.7% in 2017. Undoubtedly, significant cuts in public sector research funding led to this decline from the top rank in of international com­parisons. In 2015, the Finnish share of public sector spending in respect of the GDP was 0.96% and only topped by Denmark (1.02%) and Iceland (1%). 2016 saw a drop in the R&D share to 0.87%.