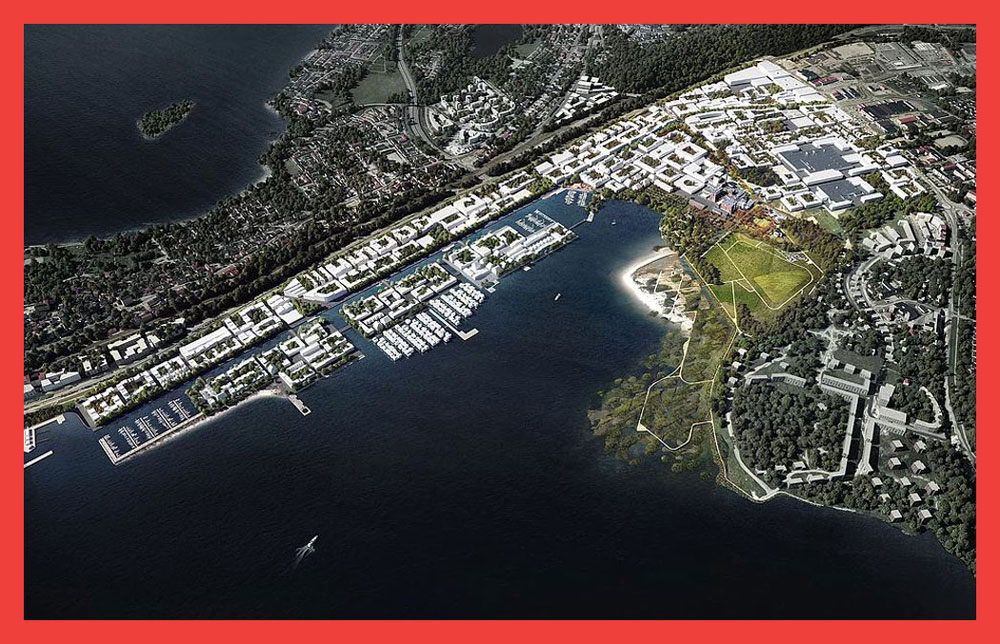 Tampere’s Central Region is currently home to about 370 000 residents, and is expected to increase to around 480 000 by 2040. To prepare, the city acquired about 250 ha of land 4 kilometers outside Tampere’s centre, called Hiedanranta Bay. Over the next 20 years the Bay will house over 25 000 new residents and 10 000 new jobs, as well as the transformation of the former industrial district into an innovation hub. In 2016, two entries, one from Mandaworks and Schauman & Nordgren Architects, and the other from Architecture studio Buenaventura, won an international open competition to develop a vision for the area. From these proposals, a structure plan has been developed. Hiedanranta Bay is planned to become a sustainable and smart city area, a development platform for intelligent urban development, experimentation, resource efficiency and circular economy. Moreover, a new tram line will connect Hiedanranta to Tampere City Center. The construction of the area is scheduled to start in 2020-2022, and the tram line will be finished by 2024

The structure plan consists of various focus areas, which includes to reach a diverse and flexible urban structure. This will be done through different typologies of streets and plots (grids). The grid system will help to characterize a specific city area and its function, while avoiding homogenous streets and wind tunnels by shifting the orientation of the building plots. This also enables sheltering public spaces and green pocket parks, which are planned together with the blue structure of the area in order to give access to anyone in the neighbourhood to a green area or water shore within 5 minutes’ walk. The grid system also prioritizes pedestrians, cyclists and public transport over private cars, while still meeting demands of different functions and user groups.

To further identify the different neighbourhoods, a variation of different elements on site; architecture, cultural elements, materials, temporary structures, historical elements and special functions, is used. For example, existing built environment are integrated into the Hiedanranta plan, and the different neighbourhoods in Hiedanranta each have their own distinct commercial character. Moreover, Hiedanranta will be a “Plus City”, which means utilizing unique resources in a new way. For example, the parking building will act as recycling centre and waste collection point.

Waste are sorted and integrated into the district’s reuse system. The energy grid enables the integration of renewable energy, connects to the existing district heating system and takes advantage of biogas and hydro power already produced in Tampere. Finally, to develop the traffic network the planned tram line is vital. To spur more cycling, cycling paths and parking are planned. Parking buildings are used for services, such as bicycle services, and the roofs are used for e.g. playgrounds.

The structure plan is the first part of a Hiedanranta master plan. The master plan will be completed in 2018, after which a more detailed city plan will begin. Four workshops have been organized during the spring of 2017, with around 200 participants. In these workshops designers, future inhabitants and entrepreneurs of Hiedanranta discussed and came up together with design solutions.

The plan has an environmental perspective, by for example planning storm water management with green and blue structures. The plan also takes a social aspect into account, by always referring to people needs and well-being.

The structure plan is an example of how to develop sustainable and dense urban districts in a brownfield area nearby a city centre. The structure plan offers examples of how to create a city district that is sustainable from both an ecological and social perspective. The infrastructure is planned with a green factor to it, while also offering walking and biking paths to contribute to a healthy lifestyle.

Once completed, the structure plan will, in combination with unique solutions for the specific area, have created a city district that produces more than it consumes. Good collaboration with citizens, businesses, and research institutions, allows for a sustainable city.