Greenfield investments and mergers and acquisitions are fundamentally different forms of FDI, implying that their effect on host economies differs substantially. Consensus does however exist around the notion that the short-term effect should be greater when a foreign company’s penetration occurs through greenfield investment.

Examined by regions with the largest share of greenfield investment during the period 2003–2016, the administrative regions of Helsinki (EUR 9,402m), Stockholm (EUR 7,896m) and Copenhagen (EUR 6,601m) emerge as Nordic leaders in attracting this form of foreign investment. Due to their innovation-based economies and booming start-up scenes, both Västra Götaland and Skåne (Sweden) have also performed exceptionally well in attracting greenfield investment securing deal value totals of EUR 4,809m and EUR 2,175m respectively. Similarly, some peripheral and rural regions in Denmark, Finland and Sweden have also attracted a substantial amount of greenfield investment (above EUR 1,000m in deal value terms) namely Dalarna (EUR 1,815m), Lappi (EUR 1,799m), Midtjylland (EUR 1,532m), Syddanmark (EUR 1,340m), Kymenlaakso (EUR 1,102m) and Norrbotten (EUR 1,010m). The dominance of greenfield capital in these regions is partially explained by their regional industrial structures and easy access to raw materials as well as by the recent transformations in traditional, resource-based industries which has opened a world of new possibilities for foreign investors. 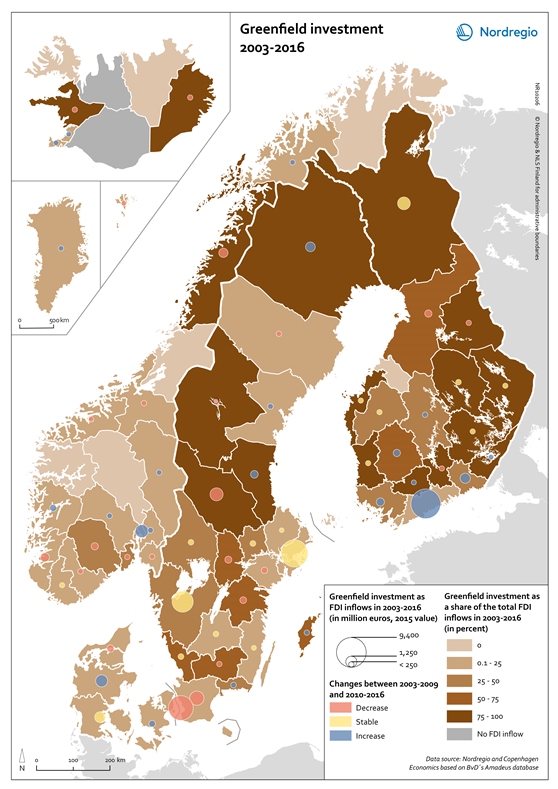