This map shows the household access to high capacity fixed broadband for all Nordic municipalities in 2016. 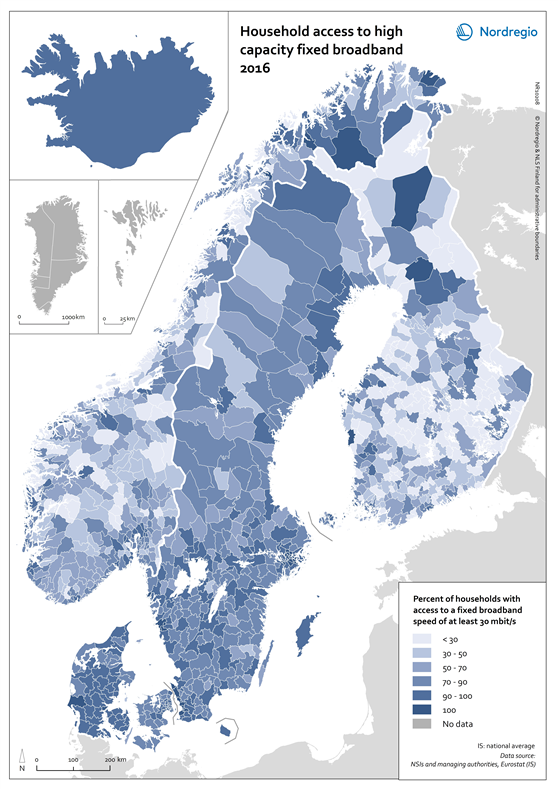 High capacity fixed broadband coverage enhances access to digital solutions in both rural and urban contexts across the Nordic Region, thus making these areas good places to live, work and run a business domestically and across national borders.

At a municipal level the household coverage by high capacity fixed broadband shows a more varied picture than that at the regional level. The average figure for Nordic municipalities was 63% in 2016, with more homogeneous figures in Denmark and Sweden than in Norway and Finland. The variation between neighbouring municipalities reflects the decision at the municipal level to prioritise investments in broadband infrastructure development as well as the nurturing of a favourable climate for the establishment of data centres requiring fast broadband networks, among other things. Fifteen Nordic municipalities, located in Sweden and Norway, had already reached the 100% mark for household coverage by high capacity fixed broadband in 2016. In Sweden, these municipalities are located in both the capital city region and in Skåne. In Norway, they are found in the more remote and rural parts of Møre og Romsdal (e.g. Giske), Troms (i.e. Lavangen) and Finnmark regions (Båtsfjord). Municipalities having values above 90% are mostly located in capital city regions as well as in more rural contexts in Jylland (Denmark), southern Sweden and northern Finland and Norway. One explanation for the high coverage in some Norwegian municipalities is the presence of data centres located on the western coast (in Stavanger municipality and Vågsøy municipality) which benefit from free cooling from adjacent fjords and abundant access to low cost, renewable hydropower. Interestingly, one of these data centres is in Sogn og Fjordane which is the county in Norway with the lowest share of households with access to broadband.

The largest group of municipalities has values ranging between 60% and 90%. Most are located across Sweden and in the rural parts of Denmark, Finland and Norway. The second largest group is municipalities with a value between 30% and 60% of households with high capacity fixed broadband coverage; they are mostly located in rural Norway and Finland and in northern Sweden. Only few municipalities have a range lower than 30% and these are found in both Finland and Norway: only one in Denmark (Samsø) and one in Sweden (Högsby) display this level of coverage.