Many Swedish and Norwegian regions, which have been so strong in the past, have recently experienced a period of economic downturn. This is due to various factors such as oil price fluctuations in Norway and the declining price for iron in Sweden. In Norway many northern regions have seen a negative GRP change of around 1–1.5%, while southern and western regions have experienced a negative change of between 1 and 2%. In northern Sweden the result has been even more dramatic with a decline in GRP between 2011 and 2015 of more than 2%, and a decline of between 0 and 1% in most of the northern and western regions. Finland has undergone a similar experience, displaying a mosaic pattern of decline with only two regions showing a moderate positive trend up to 2015. Only three countries, Iceland, Sweden and Denmark, show positive aggregated levels of GDP change between 2011 and 2015, and only Denmark show growth throughout all regions. During this period, a corridor of positive development running from western Denmark and greater Copenhagen, via Skåne and Västra Götaland and up to Stockholm seemed to emerge. These are the regions currently displaying the strongest growth and, together with Iceland, they are outperforming even Oslo and Helsinki. Decline in the northernmost Norwegian and Swedish regions is partly a result of their heavy dependence on a single type of industry. Urban economies are more insulated from the risk posed by reliance on a single sector and are often based on a diverse range of economic activities enabling them to benefit from urban growth. 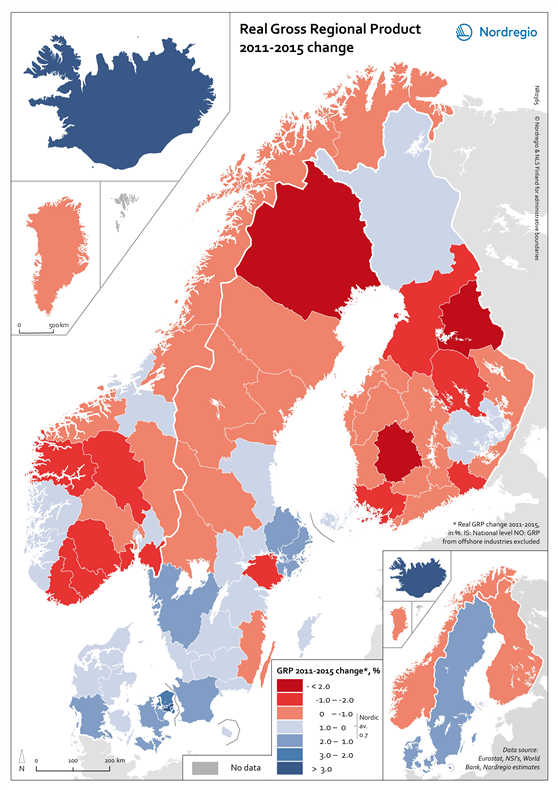