This map shows the regional potential index in the Nordic Region in 2017. The ranking process aims to highlight the socio-economic state of the Nordic regions.

Nordregio’s Regional Potential Index is constructed around a series of key socio-economic indicators with relevance in an analysis of regional development. The data from the nine selected indicators is categorised into three dimensions: demographic, labour force and economic.

The region occupying the first rank in 2017 is the capital region of Stockholm. Four other capital city regions complete the Top 5 places. Oslo is 2nd, Hovedstaden is 3rd, Höfuðborgarsvæðið, is 4th, and Helsinki-Uusimaa is 5th. Most intermediate regions (regions including at least one bigger city but not the capital, except for Iceland) are found in the first half of the ranking. Five of them are found in the overall Top 10, e.g. Hövuðborgarsvæði ranked 4th.

Some of the more remote intermediate regions are found in the second half of the ranking, e.g. Telemark in Norway which is ranked 51st and Södermanland ranked 57th. Rural regions are predominantly found in the lower half of the ranking. This type of territory greatly varies however, ranging from the ranked 12th region of Suðurnes in Iceland to the 74th and last ranked Kainuu in Finland. Finally, regions located in the Northern Sparsely Populated Areas are clustered in the bottom half of the ranking except for the Norwegian region of Troms, ranked 19th, whereas Nordic Arctic regions greatly vary in ranking between, for instance, Hövuðborgarsvæði, ranked 4th and Lappi, ranked 69th. 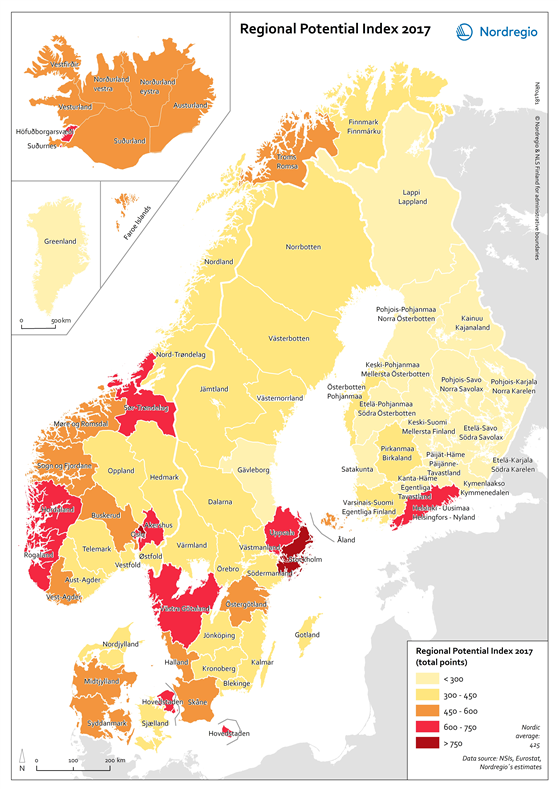