The map shows the share of jobs that can potentially be done from home. At the municipal level it shows that the highest proportion is in, or in the proximity of, the largest urban conurbations. 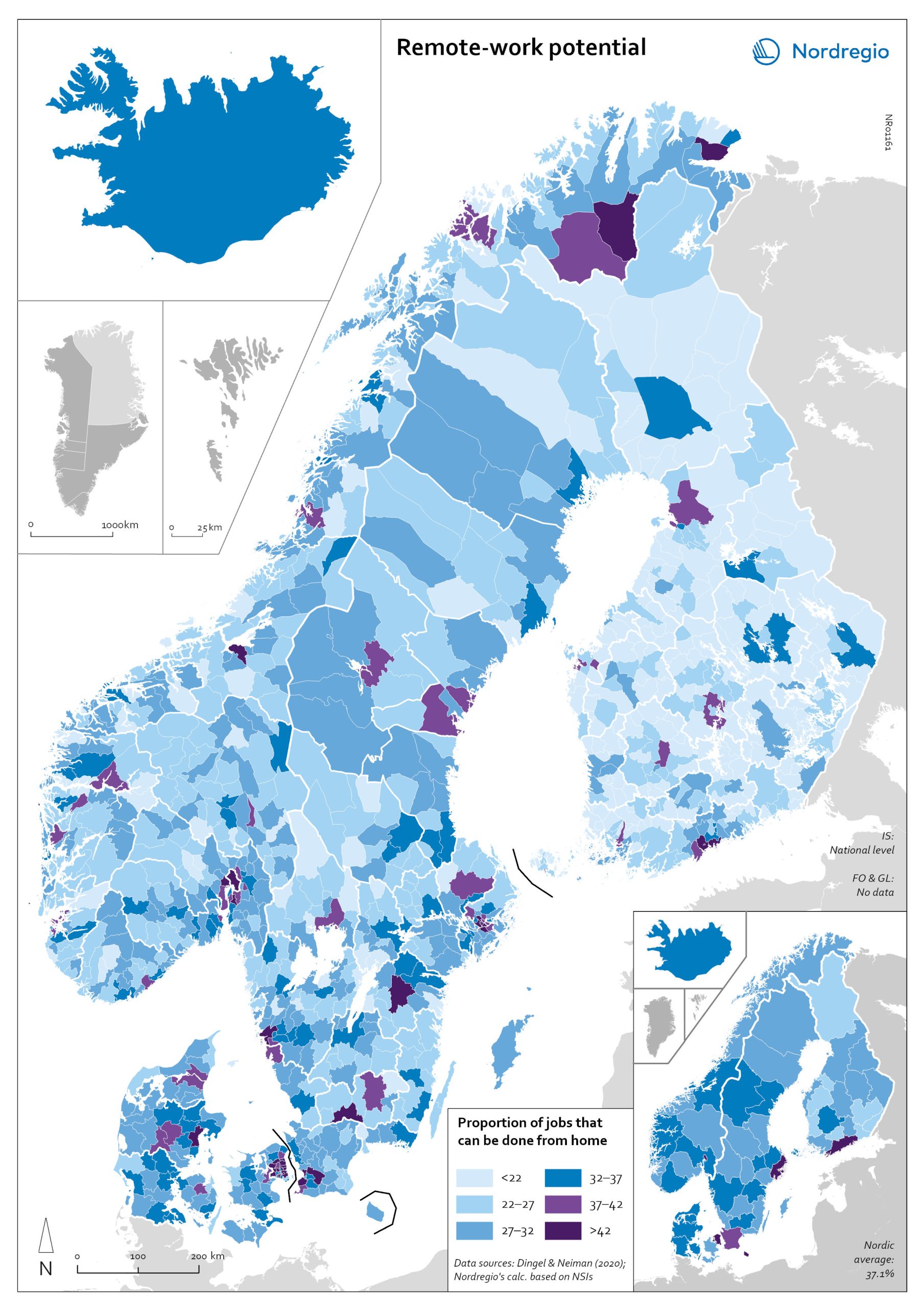 The indicator is based on the methodology of Dingel & Neiman (2020). This method estimates the proportion of jobs that can theoretically be performed from home based on the tasks included in different occupations. Dingel & Neiman’s US classification was translated to the European International Standard Classification of Operations (ISCO-08) codes. The data is based on the 4-digit ISCO-08 and includes 437 occupations. The result was that every 4-digit ISCO occupation was coded as either 1: possible to work from home or not possible to work from home. For more information about the method please look at the State of the Nordic Region 2022 publication.

The ten municipalities with the highest proportions are all in capital regions, with seven out of 10 in either Copenhagen (Hovedstaden) or Stockholm Region. In general, people in urban municipalities are more likely to be able to work from home (46.2%) than those in intermediate municipalities (32.3%) and rural municipalities (27.8%).

It seems to be the case that the higher proportion of jobs that can be done from home in urban areas relates to the differences in industrial and occupational profiles between urban and rural areas, in particular, a higher concentration of knowledge-intensive occupations in urban areas. These differences are also evident when comparing countries. For example, Denmark has a rather large number of municipalities with high proportions of jobs that can be done from home. This may be due to the fact that the majority of Danish municipalities have balanced industrial profiles, with a minor overrepresentation of trade and business. A similar pattern is observed in the south of Sweden. Here, industrial profiles vary more between municipalities; however, those with balanced industrial profiles have higher remote-work potential.

In contrast, many rural municipalities in Finland are dominated by the agriculture, forestry, and fisheries sectors, where the remote-work potential is considerably lower. In Norway, the overall industrial profile is more mixed, and this is reflected in home working, which also varies considerably between municipalities. It is difficult to comment on the situation in Iceland due to the lack of data at the municipal level. The lower proportion of jobs that can be done from home in Iceland overall (34.7%) compared to the Nordic average (36.5%) may be due to the overrepresentation of tourism and fisheries in many municipalities.