Tertiary education levels are high, with a Nordic average of 40%, compared to the EU average of 31%. At a national level, Sweden and Norway (42%) have the highest shares of their population with tertiary level education. Fin¬land (39%), Iceland (39%) and Denmark (37%) also have relatively high shares. The share of the population with a tertiary education is lowest in Greenland (19%).
There is considerable regional variation in tertiary education levels, with rates as low as 9% (Qaasuitsup, Greenland) and as high as 73% (Danderyd, Sweden). The highest share of persons with tertiary education can be found in municipalities in the capital regions (25 out of the top 50) as well as in smaller cities with large universities. For example, Lund and its neighbouring municipality Lomma (69%; 66%), in Sweden, Trondheim (55%) and Stavanger (52%), in Norway, and Aarhus in Denmark (51%).

The municipalities with the lowest shares of tertiary education in their populations were all rural. They included Qaasuitsup (9%), Kujalleq (9.9%) and Qeqqata (12%) in Greenland, Kivijärvi (15%) in Finland, Iceland (18%) in Norway, Lolland (19%) in Denmark, and Munkfors (19%) in Sweden. Interestingly, although the Nordic average for tertiary education among the working age population sits well above the EU average (31%), more than half (59%) of Nordic municipalities actually fall be-low this figure. This suggests that there may be somewhat of a gap between a smaller number of high performing municipalities and the rest. 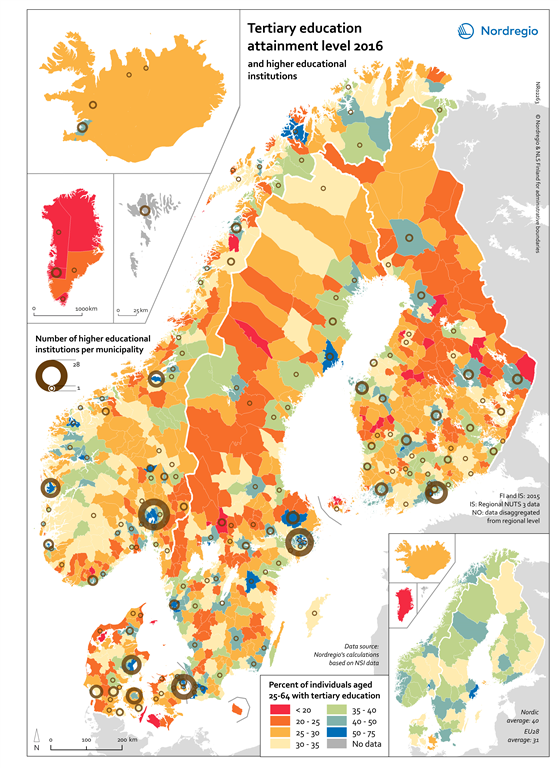