Senior Research Fellows Lukas Smas and Peter Schmitt have contributed with a chapter in the book Megaregions Globalization’s New Urban Form? which was published in January 2015.

Below you can read about the chapter and the book as a whole. 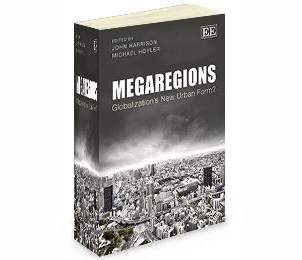 How can the established concept of ‘Norden’ – which covers the Northern European countries of Denmark, Finland, Iceland, Norway and Sweden – be understood in a brave new world of megaregions? The significance of Norden, which literary means ‘the North’, is often acknowledged to be a ‘stabilised’ transnational (mega) region. This is due, in part, to the Nordic countries sharing a number of cultural and historical commonalities, somewhat similar political trajectories through the 20th century and a well-known welfare state tradition. Yet, on closer inspection, we have seen in recent years various diverging development paths in territorial policy and politics in general, and urban and regional planning in particular. Furthermore, when adopting a relational perspective, we can detect how a number of Nordic city-regions are being formed and transformed – through transnational (business) networks and various related state spatial strategies – with the aim being to strategically place them as nodes within the global space of flows. What this amounts to is a more fluid geographical image of Norden. Against this backdrop the concept of Norden is an interesting example of how (mega) regions are being constructed through particular sets of relations, processes and mechanisms, while at the same time being challenged and deconstructed by other sets of relations, processes and mechanisms. In this chapter, the authors seek to problematize these happenings, providing critical reflections from a North European perspective. The research presented derives from a range of studies and observations produced by Nordregio.

Are megaregions a meaningful new spatial framework for the analysis of cities in globalization? Drawing together a range of innovative contributions and case studies from around the world, this book interrogates the many claims and counter-claims made about megaregions and critically assesses their position within global urban studies.
Connecting research on megaregions to broader theoretical debates about globalized urbanization, the book examines the latest conceptualizations of trans-metropolitan landscapes. It investigates the opportunities and challenges posed by planning and governing at the megaregional scale and moves the debate forward to address questions of ‘how’, ‘why’ and ‘by whom’ megaregional spaces are being constructed.

This far-reaching book will be of considerable interest to a broad audience, appealing to those engaged in urban and regional studies, geography and planning, and with direct relevance for policymakers and practitioners working at international, state and local levels.