Is it sensible to have eco-districts as a part of city planning? Two eco-districts, Hammarby Sjöstad and Stockholm Royal Seaport, developed by the City of Stockholm have helped to increase the number of Cleantech companies in the region. Their increase in turnover over the past 10 years is significantly higher than the Swedish average. This is in large part due to the international visibility these companies have gained from their involvement in these projects.

New research by Nordregio shows that during 2003–2007 a number of new Cleantech firms related to urban development were created in Stockholm. 44 firms included in the study increased their turnover steadily and significantly by total of 90.4% between 2006 and 2012, despite the global economic crisis. At the same time Sweden’s GDP increased by only 29.5% (see the figure bellow). 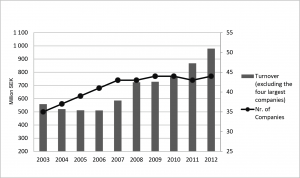 – Our research supports a key element of Stockholm’s sustainability efforts. Actively promoting eco-districts is not only important for creating green housing and infrastructure, but also contributes to the growth of the Cleantech business sector, states researcher Ryan Weber, Nordregio.
One example is ENVAC, the inventors of the automated waste collection systems used in both eco-districts. According to ENVAC, there were two important milestones that helped establish ENVAC’s international success. The first was simply having the opportunity to apply their technology in Hammarby Sjöstad and the second was the increased marketing of the eco-districts by the city of Stockholm. This helped ENVAC market their technologies internationally and led to many additional contracts, including the Wembley City Development and Singapore’s Tianjing EcoCity contract. The company now has 35 offices in 22 countries.

The research article Do eco-districts support the regional growth of cleantech firms? Notes from Stockholm, is published at Cities (Volume 49, December 2015, Pages 113–120) and is available online.