The different colours indicate 9 sectors of employment that are overrepresented in the municipality in comparison to the Nordic average.

The sparsely populated areas are dominated more by agriculture, smaller towns by industry and larger urban areas by business services. More specifically, agriculture, forestry and fisheries are overrepre­sented in several rural municipalities in Finland because of the forestry industry and along the Nor­wegian coast mainly because of fishing. Industry is over-represented mainly in Swedish towns with a long tradition of both big and small-scale indus­tries. The highest share of employment in industry (56%) was in the Swedish municipality of Gnosjö in Småland, known for its entrepreneurial environ­ment often referred to as the “Gnosjö spirit”. Employment in the electricity and water supply sector is overrepresented in municipalities with large power plants, such as Östhammar, Oskar­shamn and Varberg where the Swedish nuclear plants are located as well as in municipalities with water power plants in Norway and northern Fin­land. The hotel, restaurant and other services sector is overrepresented in the ski resorts of Norway, Sweden and Finland as well as in other places that attracts tourists, such as major nature and hiking areas, Lappi in northern Finland and the Swedish island of Öland. Tourism in Iceland has grown significantly over the last ten years with Iceland now having the highest share of employment in the tour­ist sector in the Nordic countries. In Norway, many municipalities have a slight overrepresentation of employment in health and social services while in Denmark a slight overrepresentation in wholesale and trade occurs. 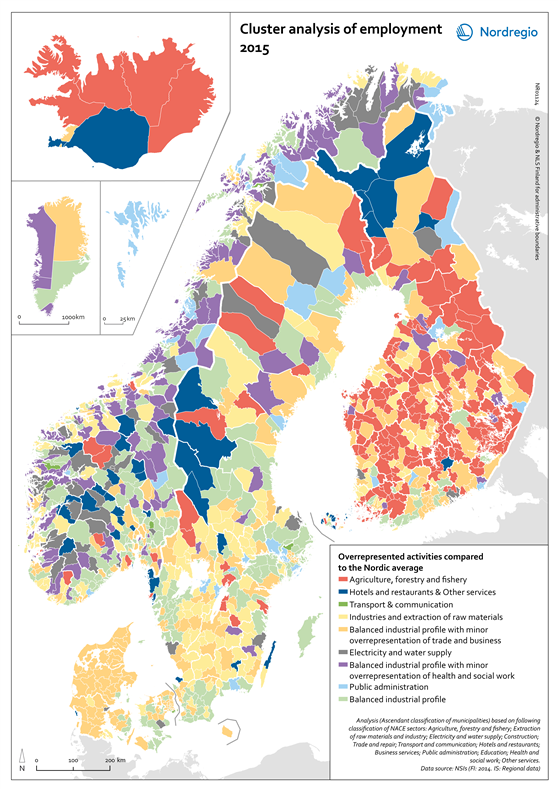