This map shows the total value of Foreign Direct Investment (FDI) in million euros, and the intensity of the FDI in the Nordic regions between 2003 and 2016.

Large capital city regions tend to be the main beneficiaries of FDI inflows and this pattern is also observed in the Nordic Region. Stockholm region emerges as the clear leader with a total deal value of EUR 110,000m. The Danish capital region attracted about half of Stockholm Region’s deal value – EUR 53,804m followed by Helsinki (EUR 45,000m), Skåne (EUR 30,000m), and Oslo (EUR 29,100m). The total deal value for Reykjavík is rather modest – at around EUR 2,000m, and is comparable to regions such as Dalarna and Jönköping (Sweden), Sør-Trøndelag (Norway) and Lappi (Finland). All Nordic regions have witnessed an increase in FDI inflows during the period 2003– 2016, except for the Suðurland and Norðurland Vestra regions in Iceland.

Large urban regions tend to attract more FDI than peripheral rural regions. Regions that have succeeded in attracting a large volume of FDI relative to their size have a high FDI intensity score. Stockholm Region again scores highest with an index value of 1269. Large Nordic urban or capital city regions such as Skåne (896), the Danish capital region Hovedstaden (841), Oslo (838), Uppsala (793) and Helsinki (777) also possess reasonably high scores on the FDI intensity index. Accordingly, the lowest index value can be found in more rural and peripheral contexts such as Keski-Pohjanmaa (Finland), Finnmark and Oppland (Norway) and Greenland. Several remote and rural regions with relatively low volumes of FDI inflows do however have quite high FDI intensity index values, i.e. above 250. This is the case in Lappi in Finland, Dalarna and Blekinge in Sweden, Syddanmark and Sjælland in Denmark and Telemark and Aust-Agder in Norway, among others. These regions have in common an important share of FDI inflows in the manufacturing and/or the mining and quarrying sectors; sectors that typically attract international investors. 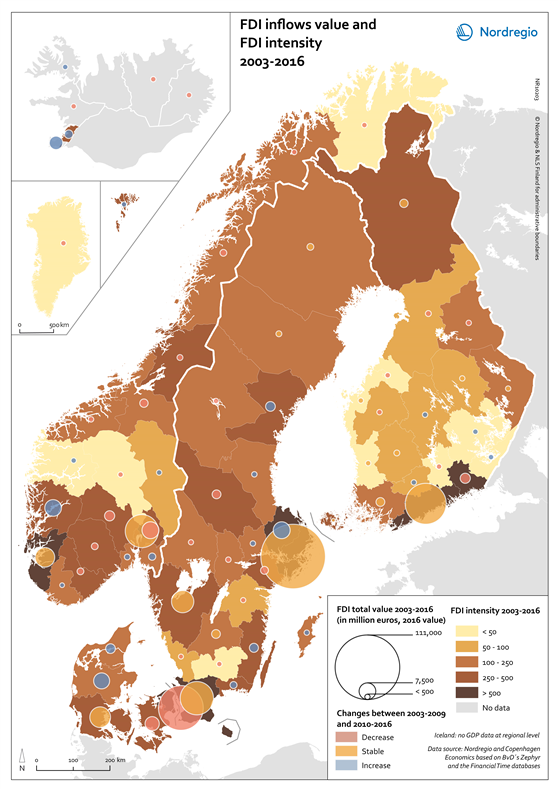