The Gross Value Added (GVA) at the regional level in the Arctic in 2016 is represented by two means in this map, which are the total GVA per capita in PPP and the GVA by branch of economic activity.

The Gross Value Added (GVA) is the measure of the value of goods and services produced in an area, industry, or sector of an economy. The GVA at basic prices is the economic output valued at basic prices minus intermediate consumption valued at purchaser’s prices.

The GVA is linked to the GDP, as both are measures of economic output. The GVA is sector specific, and the GDP is the sum of the GVA from all sectors of economy (including taxes and excluding subsidies).

The light colours (pink, yellow, and blue) show the regional GVA of all economic branches, with an Arctic average of 30 000 EUR. The pie charts represent the share of the GVA in different branches of economic activity.

The total GVA for Alaska (USA) and all regions in the Canadian Arctic were above the Arctic average, with a low GVA from the agriculture branch. In Alaska (USA), the Yukon, the Northwest Territories and Nunavut (Canada), public services and industry were the two largest branches. In Northern Quebec and Newfoundland and Labrador (Canada), the industry was the dominant branch in terms of GVA. The Nordic Arctic regions showed a slightly different picture with large shares of GVA in agriculture, especially for Greenland and the Faroe Islands. There, the total GVA from all branches was above the Arctic average, except for Lappi (Finland). Norrbotten (Sweden) and Lappi (Finland) had a high GVA in the industry branch. The share of GVA in public services was the largest in Arctic Norway and the Faroe Islands. In Svalbard the most prevailing branch was distributive trade, trade and communication with no GVA from agriculture. The Russian Arctic showed contrasting pictures for each of the regions. Nenets, Yamalo Nenets and Khanty-Mansi were among the Arctic regions with the highest total GVA, whereas the other regions have a total GVA far below the Arctic average. Economic activities related to industry dominates in most of these regions, except in Kamchatka. The natural resource is the mainstay and backbone of the economy in the Arctic Russia. 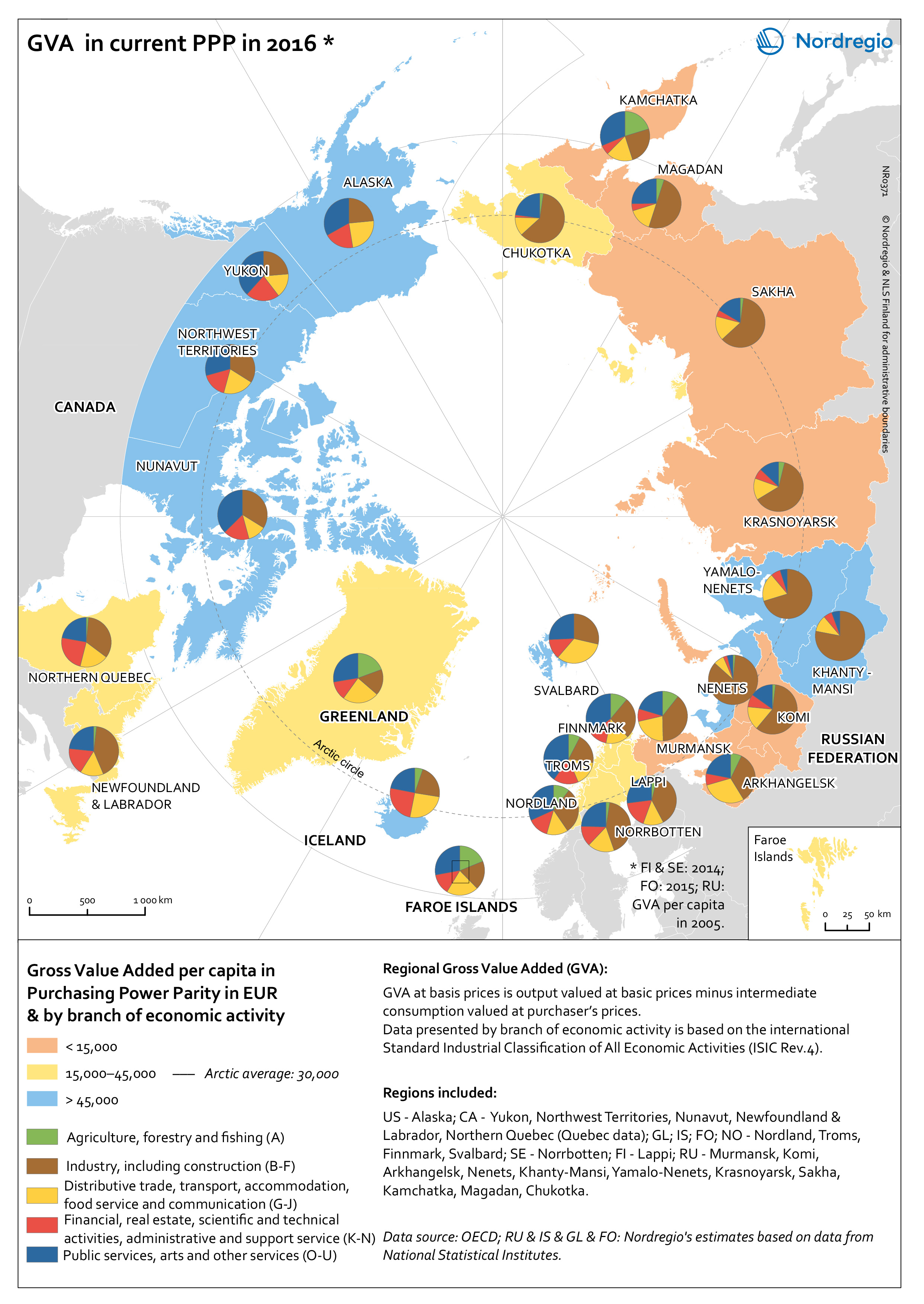