There are ongoing debates on administrative municipal and regional reforms in the Nordic countries. While no large-scale reforms have yet occurred, both Norway and Finland have undergone a gradual process of municipal mergers, with restructures happening almost annually in recent years. On 1 January 2017, two municipal mergers occurred in Finland. One of them was the merger of Luvia with its’ larger neighbour Eurajoki. Simultaneously, and actually for the fifth time in 13 years, the Finnish municipality of Kuopio in the Pohjois-Savo region merged with its smaller north-eastern neighbour, Juankoski municipality.

The orange fill surrounded by a grey boundary in the map shows Kuopio’s extent by 1 January 2017, while the hatched area represents Kuopio’s municipal boundary prior to 2004. The coloured boundaries in the map show the gradual expansion of Kuopio from 2004-2017. 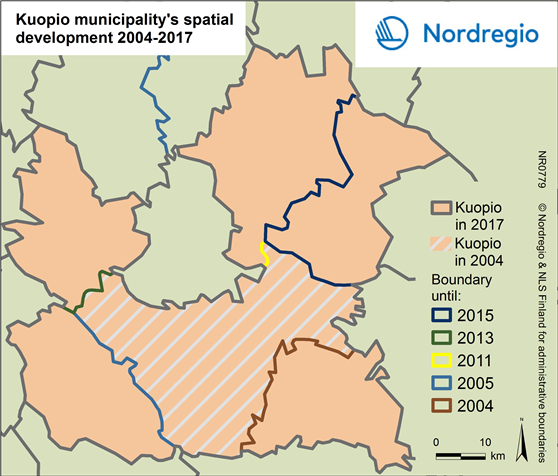