This map indicates the expected old-age dependency ratio in the Nordic municipalities in 2030. 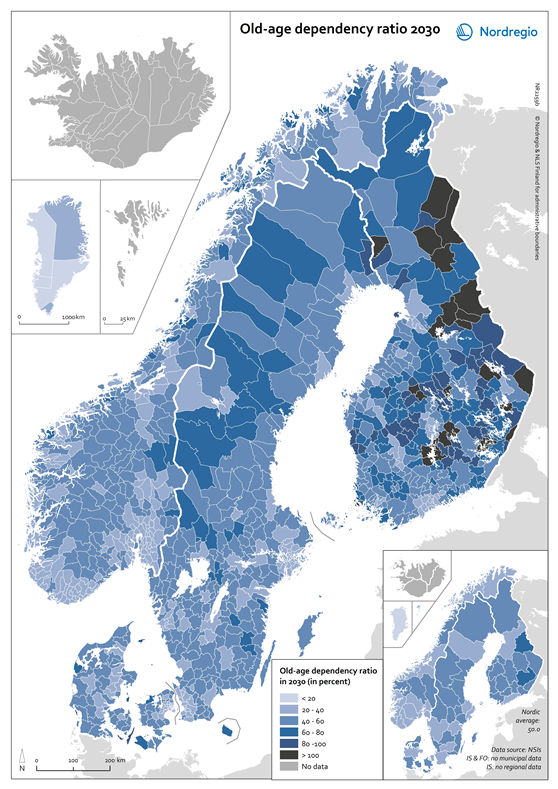 The smaller map shows the expected old-age dependency ratio in the Nordic regions. The old-age dependency ratio is the number of elderly people at an age when they are generally economically inactive (i.e. aged 65 and over), compared to the number of people of working age (i.e. 15–64 years old). It is a standard indicator used to measure the pressure on working-age population.

All National Statistical Institutes (NSIs) expect that the population ageing trend will continue in the coming years. Almost all municipalities in the Nordic Region are expected to have higher old-age dependency ratios in 2030 than today. These increases will however begin from various levels and progress at different speeds, reflecting differences in current age structures and expected demographic behaviour. Much higher old-age dependency ratios are expected in many rural and sparsely populated areas. The highest levels are projected for many municipalities in northern and eastern Finland, which will have more than one person of pension age for every person of working age. Most other rural areas in Norway, Sweden, Denmark and Finland will have lower old-age dependency ratios, but levels vary widely between 20% and 100%. Large parts of Greenland will retain comparatively young age structures in their population up to 2030.

The map is based on municipal and regional data from the National Statistical Institutes. However, no municipal data was available for both Iceland and Faroe Islands; as well as no regional data for Iceland.