The second parallel session focused on ‘Socially inclusive cities in policy and practice’. Mitchell Reardon, a resident of Vancouver and a former employee of Nordregio, was the first speaker of the session. Mitchell spoke about tactical urbanism: small-scale interventions to transform urban spaces in ways that make them more usable, sustainable, and potentially inspire long-term change. Good ideas and practices at a small scale and short -term can be transferred to other places and districts in the city. Tactical urbanism also stresses the importance of inclusive decision-making processes. Reardon gave three examples: 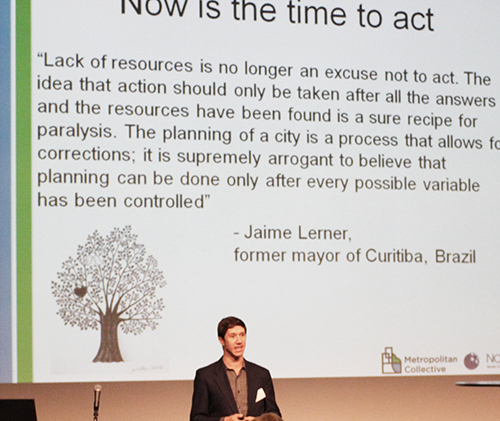 Viva Vancouver is a public organisation funded by the city, which was established to change residents’ perspectives on what streets can be used for. Viva Vancouver involves creating new public space on the streets and ‘unlocking’ existing urban spaces for public art installations. In Dublin, public funding allows employees to devote 1% of their work time towards innovation. This time is used for the trial of new ideas within a defined space for a short period of time (from 1 week to 1 year). Ideas come from the public, architects, planners, scientists, etc. Successful ideas are then posted elsewhere in the city (e.g. electrical boxes). This approach fosters innovation within the city of Dublin, and many public and grass-root innovations emerged. In San Diego, the San Diego Civic Innovation Lab is embedded in the mayor’s office. It aims to revive pubic space and catalyse public engagement with the urban area. It is an interdisciplinary initiative, involving many workers from across different sectors. Most notably, these projects have been used across the border with Tijuana, where work has been done in neighbourhoods that have been traditionally marginalized. Even with relatively few resources, this initiative contributed to positive transformation within the San Diego-Tijuana community.

The participants in the session were then encouraged to think of pro’s and con’s of digital and direct engagement, and to write it down on post-it notes. The notes were put up on a board and discussed.

Public engagement is important, but it can be difficult. Digital engagement has not replaced real life engagement- it is best to use them in parallel! Among the weaknesses of physical engagement is that it is difficult to reproduce, control, and to engage different societal groups. A significant question also remains: how can we transfer these one-time operations (public engagement practice) into long-term planning procedures? 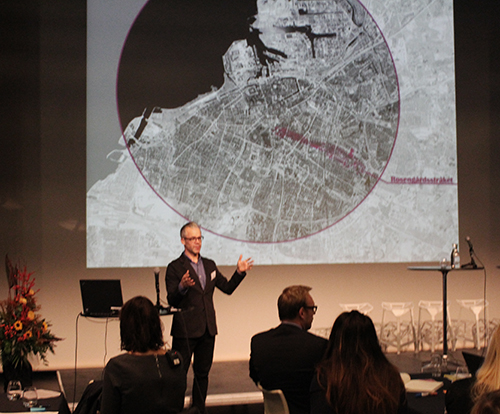 The leaders of this project decided to have a wide open dialogue with citizens. To do this, they went out and asked people what they wanted. Many residents were somewhat frustrated, as it seemed like there was weariness and scepticism towards the idea of new local projects. Many felt like they had already expressed many times what they wanted in their local area, and were tired of seeing no positive changes. The feedback from young women in the neighbourhood was that they did not see any public spaces in Rosengård that had been made for them. Local planners decided to talk to and engage young women, a group that is often ignored within public projects. These young women came up with an idea to have an open stage in Rosengård in order to play music and host activities. This resulted in a functional community space that took into account the needs of an underserved demographic group.

Some significant questions and answers from the discussion on this presentation included:

This project reflected on gendered spaces and targeted young women. Are there other user groups that we miss out or don’t see?

Is this project changing the culture in Rosegård? Involving young women is good – it’s cheap, it’s a good way to distribute municipal budget in the neighbourhood, it creates more engagement. But what is the result?

“We see it as a learning experience. We need enthusiastic community leaders. It could be a model for the future. We may think about how to include different community and societal groups, like those who are disabled, elderly, single mothers, etc. “

Marianne Gjørv reflected on the Grorud Valley Programme (Groruddalssatsningen)  in suburban Oslo. At present, it is the largest urban regeneration project in the Nordic countries. The district itself (Grorud Valley) is very large for such a comprehensive regeneration program, with a population of approximately 140,000. The Grorud Valley, although it is a large area within Oslo, is relatively poor and contains a high proportion of residents from a foreign background. 1 billion NOK have been used for development within the Grorud Valley Programme, including ambitious efforts to improve education access, employment initiatives, health, and green space quality. A strong effort was made to gather local suggestions and see what residents most desired within their neighbourhoods. Feedback from residents so far has been very positive.

The Grorud Programme has widely been considered a success, and it can serve as an example to other Nordic cities looking to counteract the harmful effects of segregation and economic deprivation. This project shows that large-scale regeneration can be done in a way that is inclusive, sustainable, and cost-effective.

Moa Tunström from Nordregio is investigating segregation and social sustainability within Nordic cities. Her study raises awareness of the social aspect of sustainability, as residential segregation is significant challenge for Nordic cities, particularly in the wake of increasing immigration and housing shortages. Segregation is most often discussed as a spatial phenomenon, referring to urban spatial divisions between different income levels or ethnic groups. However, segregation is also a phenomenon related to economy, politics, and labour market structures. Additionally, stigmatization is an important topic in relation to segregation. There are rumours spread about many cities and districts. Certain events are (mis)interpreted as being common in particular areas, which can lead to divisive and stigmatizing narratives. It is import to keep in mind all aspects of segregation when addressing these urban divisions. Segregation, within all of these dimensions, is an increasingly pressing issue in many Nordic cities.

At present, social sustainability projects in the Nordic countries most commonly include local area development projects, social mix housing policies, and targeted commissions. However, ‘social sustainability’ lacks a coherent definition, despite being a powerful and frequently referenced policy concept. There is a need to critique and reinterpret the concept in the context of increasing urban divisions within Nordic capital cities.

We must also ask, what are the problems to be solved? We might be faced with a lack of affordable housing, discriminatory employment practices, uneven education, poor services, crime, and a potential for social conflicts. We should also think about whom ‘segregation’ really involves and affects. Who is segregating, and who is segregated? Often, the wealthiest groups in society are the ones who are driving exclusion, gentrification, and segregationist movement patterns.