How can Nordic cities profit from the diversity of their population?

How to turn diversity into advantages? Dr. Tuna Tasan-Kok from Delft University engaged the whole audience while trying to give some answers to the most current topics of the day: diversity and social inclusion in cities. 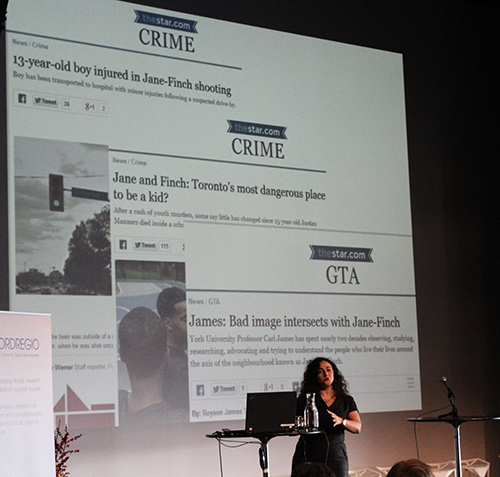 Diversity is not easy to grasp, as there are new forms of diversity emerging, due to population mobility as well as an increasing heterogeneity of migration in terms of country of origin, ethnic groups, legal status and so on. Tasan-Kok mentioned how challenging it is to design policies addressing these different groups, and suggested that policies should on the one hand meet the needs of diverse people, and on the other hand increase or maintain the competitive advantage of cities. European urban diversity policies are people-based but are shifting towards a neo-assimilationist direction in recent years, meaning that social and cultural aspects of integration dominates policy making tendencies. Ethnic diversity is highlighted as an economic asset in the policy discourses of some cities (e.g. London). But an ethnicity and race-based approach fails to address the needs and capacities of a complex urban society nowadays. Putting people under broad categories leads to integration and social-mix policies which despite good intentions fail in reality.

How to tackle the complex issue? Tasan-Kok suggests that there is a need for other instruments, such as diverse and tailor-made policy instruments at the community level, supported by macro level policy support in line with the local needs. For example, these initiatives might aim at increasing the sense of belonging by joint activities , supporting disadvantaged groups, creating space to support creativity, etc.

Nordic cities can also benefit from a diverse urban population in our cities. With the help of policy instruments it is possible to create a positive perception of diversity. Diversity can contribute to social and economic well-being of deprived neighbourhoods. This potential can be realized through tailor-made policy interventions that are designed to address the actual needs of the people, and that are supported by the macro scale policies. First, it is important to identify the actual needs at the (micro) neighbourhood scale and develop tailor-made policies to address them. Second, it is important to increase shared activities and support systems at the neighbourhood level. Third, at the macro level, there is a need for providing funding and conditions to fight with larger issues related to socio-economic inequalities.

Creating new public spaces to increase meaningful encounters and recognition between diverse groups is essential. This refers to creating mixed ad shared activities in places/spaces to force people to have meaningful interaction with each other, such as schools and libraries where we have to do something together. Parks are not enough.

Tuna Tasan-Kok, what do you think about the important steps for fostering the positive impacts of diversity, through integration?

“I don’t see integration as a positive policy approach. It is not a constructive policy approach. What we see in our research is that integration policies were based on typically 1960’s mass immigration to Europe – of low educated migrants who needed to learn basic languages and skills to become a part of our societies. To a certain extent these policies lead towards multicultural policies that have also been widely seen as a failure. And why is this, because we don’t recognize diversity more generally as a positive aspect, as an advantage for our societies in Europe. If you look at the United States or Canada, these are countries fundamentally based on migration – it’s a completely normalized situation, coming from a diverse background. So of course there are certain things that you have to do, like learn a language or acquire relevant skills, but apart from that the diversity itself is embraced.

Tasan-Kok continues: “Why is that? Because we know that the newcomers are also very diverse. Even within the ethnic groups we have an enormous diversity of economic backgrounds, education backgrounds and so forth. So the current policies in Europe do not make the best out of people. I think they actually work the opposite way, our policies tell our newcomers that you are different from us, creating otherness and ultimately leading to more segregation in our society. So if we want to integrate them better in our societies then we have to start from a new point of view, which is to see newcomers as advantages for societies, and to further understand which gaps these people can fill in our society. We have to look to these points in our policy agendas. “

So there is almost the impression that integration is more like assimilation, where you have to become like those societies to which you are going?

“Yes! Our research shows that roughly half of Europe or more have immigration policies that work on the basis of assimilation. These policies have positive intents, but they ultimately work to segregate our cities even further. “

Do you think the frictionless city is a challenge or an obstacle to celebrating diversity, or could it be a positive thing?

“I think it could be a positive thin, but it’s not right now. Especially when you hear that borders are being closed. You see now even border controls between Sweden and Denmark, so it’s really hard to even talk about high speed connections between our cities when these things are going on. So on the one hand we have this agenda about competitiveness, in a connected and united Europe, but then we have on the other hand discussions about how some states will close their borders, so this is a huge conflict in our agendas.

Do you think the strengths of diversity are communicated well in the media?

Tasan-Kok: “If you look at the media today, it all about the negative impact of refugees and of immigrants on our cities. This only serves to increase the negative feeling to the public. My neighbour in Belgium, has an issue with seeing people in headscarves. Five years ago it would have been societally unacceptable to speak this way, but now it seems to a be normalised discourse. So the media has to understand the diversity within the immigrants, and their role in reflecting the positive aspects of diversity.”