The map displays international cruise ship passengers and calls in the Nordic Arctic region with itineraries of several days (i.e. regular, scheduled ferry connections, such as Hurtigrutten in Norway, are not included). The size of the circles indicate the number of cruise passengers in 2014 (2015 for Greenland), while the colour of the circles shows whether there’s been a positive, neutral or negative change in number of passengers over the years 2011-2014. The orange bars represent the number of cruise ship calls per each port in 2014 (2015 for Greenland).

In Arctic Norway, cruise ship tourism is centered around some ports in Northern Nordland, Troms and Finnmark, in particular Lofoten and Narvik, Tromsö, Hemmerfest and Nordkapp (Honningsvåg). Murmansk in Russia is outside the Nordic region but is a cruise ship destination with connections to Nordic Arctic ports. Svalbard, relatively isolated from the other Arctic Nordic ports, received a substantial number of cruise passengers and calls in 2014 (to the main settlement Longyearbyen).

In Faroe Islands, Torshavn is the prime destination for cruise ships. Greenland had cruise ship entries to almost 20 ports in 2015 (no 2014 or earlier data is available for Greenlandic ports). As the settlement structure in Greenland suggest, most cruise calls to Greenland are found in the West Coast.

Iceland’s largest cruise ports in 2014 were Reykjavík, Akureyri, and Ísafjarðarbær. However, there are a number of other ports receiving significant cruise ships, spread along the entire Icelandic coast.

The Baltic Sea part of Northern Arctic saw limited cruise ship tourism in 2014, when compared to the Nordic Arctic Atlantic and North Sea destinations: Kemi and Luleå, the two ports receiving cruise ships with passengers in this area, are located rather far from the main Baltic Sea cruise routes between Stockholm, Copenhagen, St. Petersburg, Gdansk/Gdynia, Helsinki, Tallinn, Rostock and Kiel.

Cruise tourism in the Nordic Arctic region in 2014 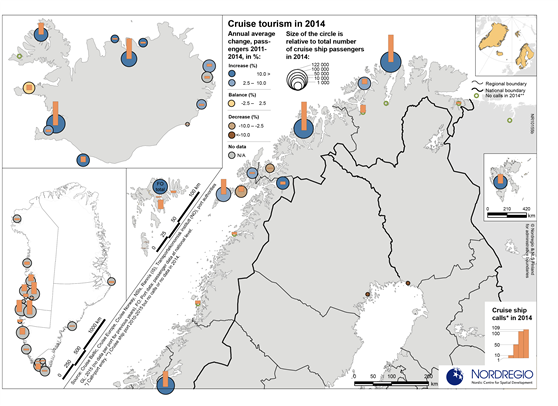