This map shows the annual average change in percent of foreign citizens as a share of the total population for Nordic municipalities during the period 2008-2017.

As the map shows, the pattern is rather scattered at the municipal level. Those that have seen the highest increase in the share of foreign citizens in their populations are mainly rural municipalities which started out with quite low shares. The reverse is true in the capital regions of Copenhagen, Helsinki, Mariehamn, Oslo and Stockholm. The populations of these regions have for many years included a large share of foreign citizens and, as such, the increase in the overall share appears relatively modest.

Finland, which, compared to other Nordic countries, has had a relatively low share of foreign citizens residing in the country, has the largest number of municipalities (14) which have experienced a negative change over the period 2008-2017. In Sweden, there were two municipalities with a similar negative trend (Haparanda and Nykvarn), while there was only one municipality in Norway which experienced a similar negative change (Verran). The share of foreign citizens in the population increased in all Danish municipalities during the period.

At the regional level, the five largest increases have occurred in Norwegian and Swedish regions, located rather far from the capital regions: Møre og Romsdal (Norway), Blekinge län (Sweden), Sogn og Fjordane (Norway), Kalmar län (Sweden) and Finnmark (Norway). At the other end of the scale, the five regions with the smallest increase are: Kainuu (Finland), Norrbottens län and Stockholms län (Sweden), Pirkanmaa and Keski-Suomi (Finland). 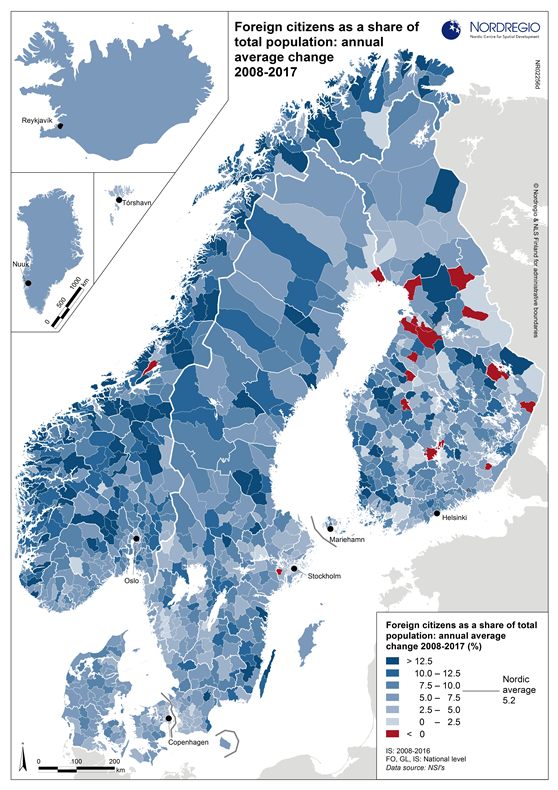