Ef ég nenni, Himmel på jord, Hei Mummo, I en stjerneregn af sne and Tänd ett ljus are among the 1.3 million tracks that have been classified as Xmas music by Spotify, a music and podcast streaming service developed by a Swedish startup. 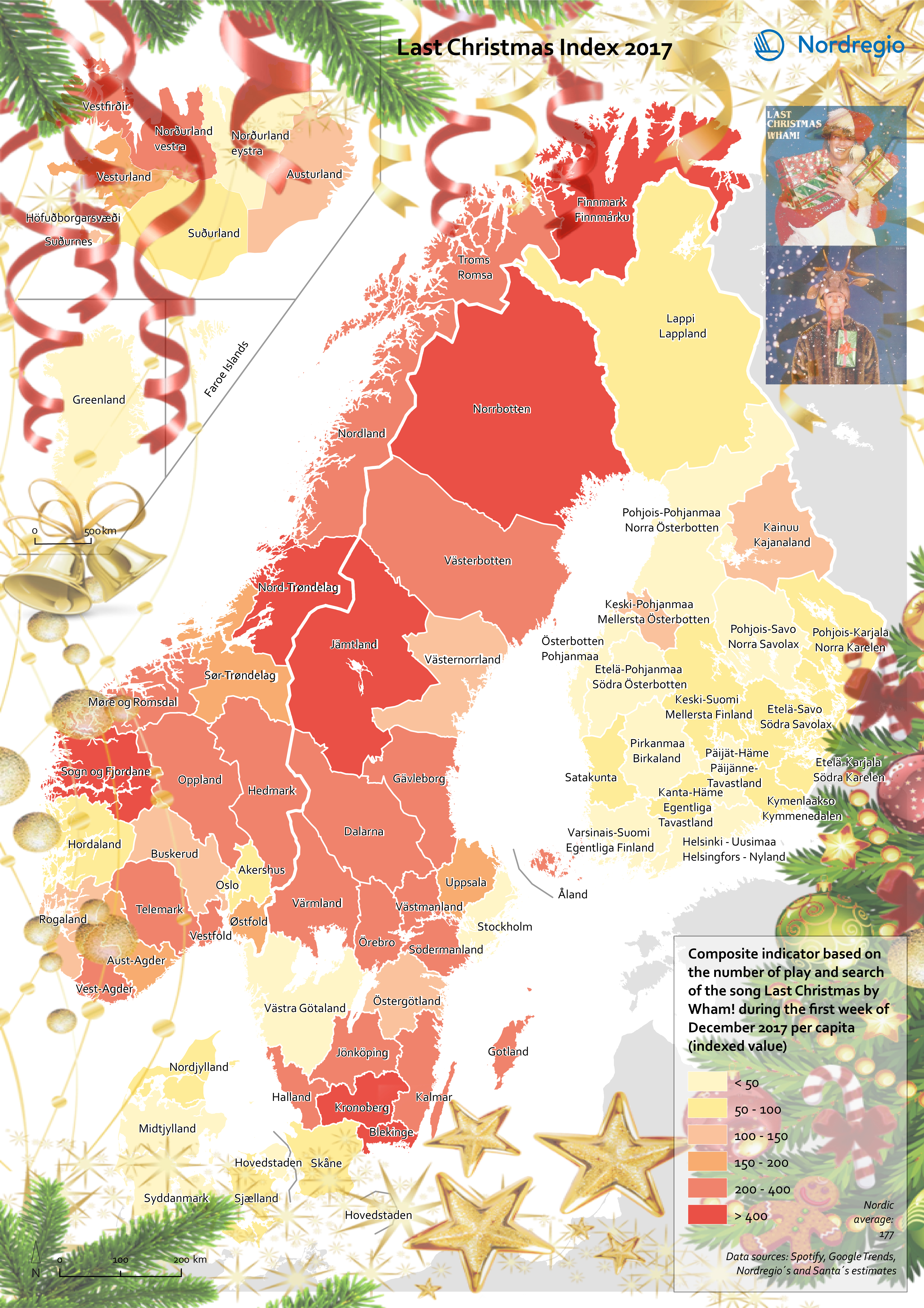 A 2015 data analysis by the Swedish startup (Spotify, 2015) showed that the Nordic countries of Denmark, Norway and Sweden listened to the highest percentage of Xmas music, as the holiday approaches. Xmas songs streamed went beyond the threshold of 0.05% of all songs streamed daily on November 23rd in Denmark, making it the first country in the world to reach that symbolic threshold in 2015. Norway is second and Sweden third, reaching the threshold on November 25th and November 26th respectively. Finland is 7th, reaching that threshold on November 30th, whereas there is no mention of Iceland reaching the value of 0.05% before December 16th. The share of Xmas
songs even reach values of 0.20% in both Denmark and Norway later in December that year (http://everynoise.com/xmas.html).

Last Christmas by Wham! is the most played Xmas song on this streaming service in Denmark and Sweden, 2nd in Finland, 4th in Norway and 5th in Iceland (Spotify, 2017).
In a wider context, it is the 4th most streamed Xmas song worldwide.  During the first week of December 2017, Last Christmas has been streamed 1,162,723 times in Sweden, 685,858 in Norway, 606,763 in Denmark, 161,359 in Finland (including Åland) and 28,760 in Iceland. The song has also been played in Greenland and Faroe Islands but no
figures on streaming is available. However, a source from the Greenlandic Broadcasting Corporation indicated that the song has been played three times during the last
month on KNR.

Looking at the regional level, variations in the consumption of Xmas song streaming can clearly be seen. The map of the Last Christmas Index 2017 is the result of the
combination of data on the total number of streaming of that song at national level and the number of Google search at regional level during the first week of December 2017,
as well as estimates provided by Santa for the regions with missing data. The resulting index value indicates the interest in that song at regional level, with values ranging from 7 to 678. The regions with the highest Last Christmas Index values are to be found in parts of non-metropolitan regions of both Sweden and Norway. Jämtland has the highest indexed value, closely followed by Kronoberg and Sogn og Fjordane. These regions have in common to stream Last Christmas, maybe with repeat mode activated, and to further investigate that song by doing a search online about that song. On the other end of the scale, regions in both Finland and Iceland as well as capital city regions can be found, where the Xmas addiction to that specific song is not as important as in other parts of the Nordic Region.