Data sources:
Own calculations based on NSI data 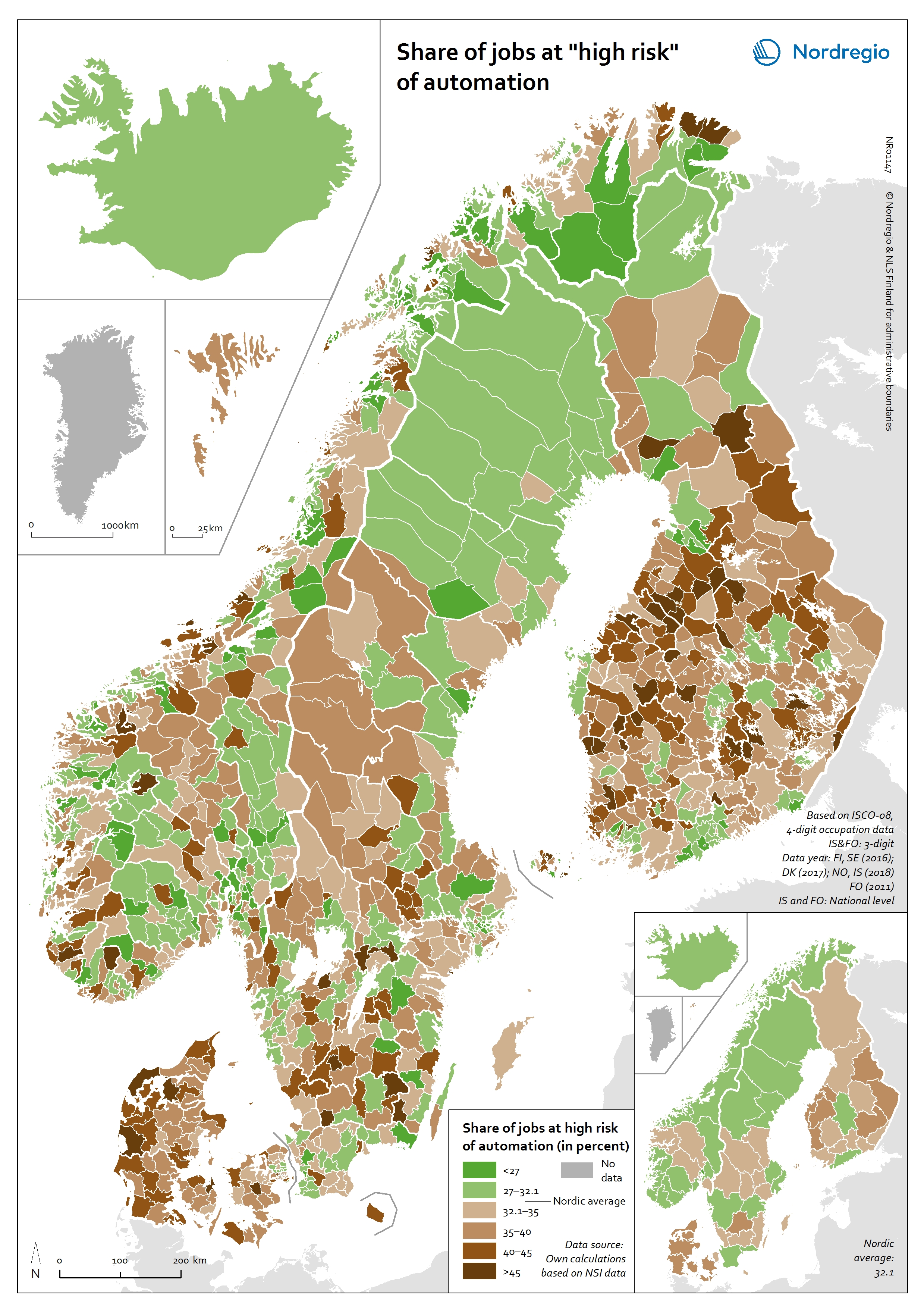 The map shows the share of jobs at “high risk” of automation based on the methodology of Frey and Osborne as outlined in the paper “The future of employment: How susceptible are jobs to computerisation?” (2017).

Based on Frey and Osborne’s methodology, approximately one third (32.1%) of Nordic jobs are considered at “high risk” of automation in the next one to two decades. This means that 32.1% of jobs in the Nordic Region fall above the 0.7 threshold identified by Frey and Osborne (with 0 meaning no automation potential and 1 meaning complete automation potential). Although this is significantly lower than the figure revealed by Frey and Osborne in the US context (47%) it still raises cause for concern. Faroe Islands has the highest portion of jobs at risk (38.7%) followed by Denmark (36.7%), Åland (36.3%), Iceland (32%) and Finland (31.9%). Norway (29.9%) and Sweden (30.9%) have the lowest number of jobs in the high-risk category.

At the municipal level, the municipalities with the highest share of jobs at high risk of automation are Pyhäntä (58%), Kyyjärvi (58.1%) and Lestijärvi (56.9%) in Finland; Gnosjö (51%) and Hallsberg (50%) in Sweden; and Snillfjord (49%) in Norway. In these municipalities, a large proportion of the workforce are employed in a specific occupation, for example, carpenters and joiners in Pyhäntä, machine operators in Kyyjärvi and Gnosjö, and livestock and dairy producers in Lestijärvi. Another thing that these municipalities have in common is that they are all rural.

The municipalities with the lowest share of jobs at high risk of automation are Rælingen (15.0%), Utsira (15.2%), Kvæfjord (17.2%) and Kárášjohka – Karasjok (17.9%) in Norway, and Vårdö (16.8%) on Åland. Based on occupational data from the national statistics institutes, it appears that these municipalities all have a higher than average proportion of jobs in sectors such as health care, childcare and education – all professions with relatively low automation potential.