The size of the arrows equates to the size of the flow of migrants from the country of origin to Denmark. Only average annual inflows greater than 1000 people are included. Nordic countries are shown as dark grey, while all other countries of origin are shown in light grey. 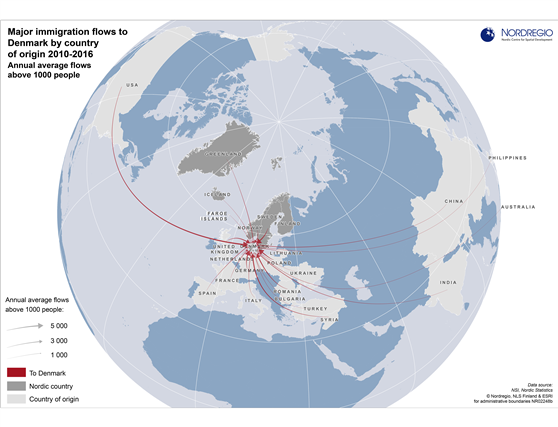 During the measured period, there were more than 23 average annual inflows to Denmark that exceeded 1000 people. However, none of these inflows were as large as the dominant inflows to Norway and Sweden during the same period. The largest inflows to Denmark were around 5000 people each from U.S., Sweden, Germany and Poland. Due to historic and political connections, Denmark, unlike Norway, Finland and Sweden, had substantial annual inflows from the Faroe Islands, Greenland and Iceland (around 1000 or 2000 each). These numbers are particularly notable in the context of the small populations of