Is there a Nordic region?

That is a problematic question from the geographical point of view. One can approach the question through maps focused on e.g. geopolitical, maritime, language themes.

The maps will elaborate on and problematize what constitutes the Nordic region, including phenomena that cross national boundaries. Some of the maps are at a high-level “zoomed out” scale, depicting the Nordic region in a global or European setting, while others encompass solely the Nordic countries and sub-regions. Several of these maps were specifically produced for a RegLab session in March 2015.

The maps relate to a number of themes, such as (please find maps on the right):

There are also several maps depicting the hierarchy among Nordic regions and municipalities according to the pan-European “NUTS” (Nomenclature of Territorial Units for Statistics) and “LAU” (Local administrative units) classification systems. Table 1 below summarizes the different NUTS and LAU levels, including the numbers of units and unit names. 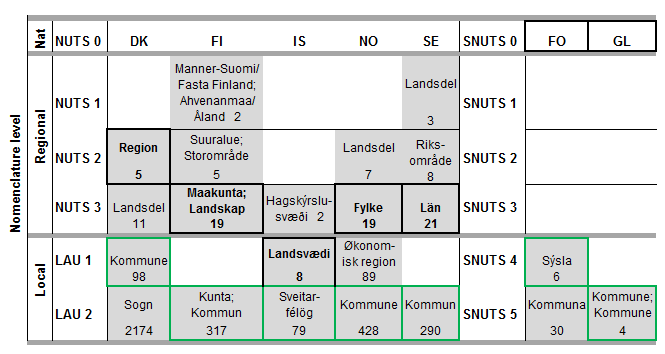 Summary of the Nordic regions and municipalities according to the pan-European “NUTS” (Nomenclature of Territorial Units for Statistics) and “LAU” (Local administrative units) classification systems. Source: NSIs, Eurostat, ESPON

The “NUTS” levels range from NUTS 0 (national level) to NUTS 3 (smaller regions). The “LAU” system consists of two levels: Local administrative units, level 1, and Local administrative units, level 2, of which the latter are equal to the municipal level in most Nordic countries. The Faroe Islands and Greenland are not officially included in the “NUTS” and “LAU” systems, but are referred to as “SNUTS” (Similar to NUTS, levels 1-5).

The “NUTS” and “LAU” systems classify individual countries’ administrative levels into one common structure, e.g. by taking into consideration population size, and thus facilitate comparisons between European countries’ regions and municipalities. However, these comparable administrative levels do not always match with the commonly used administrative structure within each country, even when comparing Nordic countries. Black frames in Table 1 represent the “standard” regional division in each country, while the green frames show the local units (in most cases municipalities) which are comparable from a Nordic perspective.

This is an ongoing, explorative map project with focus on the Nordic region.