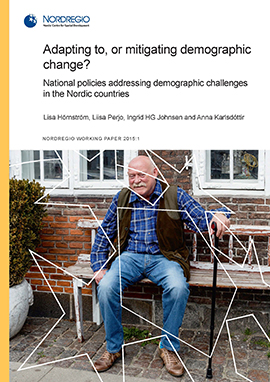 Adapting to, or mitigating demographic change?

The Nordic countries continue to experience the impact of the long term demographic trend of migration from rural areas and smaller communities to larger towns and cities. In addition, the share of the Nordic population aged over 65 is increasing. Ageing population is especially pronounced in areas outside the largest city-regions. Depopulation and having relatively fewer people in working age is expected to have a severe impact on many Nordic municipalities causing additional problems with the future provision of welfare services. In addition, these municipalities face challenges when it comes to accessing the labour force especially in the welfare sector. Moreover, while population decrease imposes particular challenges to rural and peripheral areas, the large city-regions in the Nordic countries are experiencing significant population growth, bringing an altogether different set of challenges.

At the same time, the nuances in this general picture need to be acknowledged given, primarily, the continuing strongly positive fl ow of international migration. All municipalities in the Nordic countries experience an in-migration of people from abroad. Indeed, in Norway in particular, migration from abroad has clearly contributed to population increases in rural and peripheral areas. The major demographic trends in the Nordic countries can be summarised as follows:

In this report, we study how national level policies in the Nordic countries aim to address the main demographic challenges faced. The report focuses on those policies that address demographic challenges specifically from a territorial perspective. The report covers each of the Nordic countries plus the autonomous areas of Åland and the Faroe islands. Greenland is not included in this policy overview because the Working Group does not have a member representing Greenland.