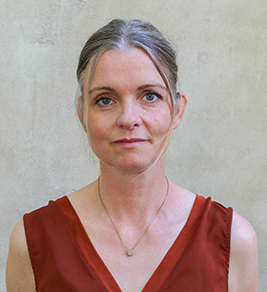 Hjördis is a social researcher with an interest in globalisation, migration, integration, sustainable lifestyle, green growth and social innovation, among many other things. She likes working in the intersection between research, policy and practice. She is specialised in human geography and sociology.

From Hella to Stockholm

Working with migration and rural issues I find it easy to feel at home with these topics, a least partly

Growing up in the village of Hella Iceland, with just over 600 inhabitants, I have experienced being part of small community where every single person counts. In a community where everyone knows everyone, with both advantages and disadvantages. Organized leisure was scarce and everyone had to find their own way to keep themselves entertained. Nature stepped in at times to break up the everyday life and I have memories, coming home from school sitting by the only window, in the house, facing the volcano Hekla to watch the ongoing eruption. Another memory is lying next to a sled at the bottom of a hill making a snow angel under the northern lights. All places have something special to offer.

From the village I followed the route to the city like many others, after spending one year in the United States. After moving around quite a bit in Reykjavik I became a migrant, when moving to Stockholm. Maybe not a radical change but still a new country and a new language. I got to experience having my Swedish corrected by my five and eight year old kids who can be strict teachers but also honest and encouraging. Feeling confident one day I went fishing for compliment for my Swedish skills, received the honest and diplomatic answer “Yes mom, you know a lot of words, but it is sometime weird how you say them”.

The transition from Iceland to Sweden has been smooth, due to rather similar culture, language and education, but the migration still offers the challenge to integrate which allows me to better understand those who have a greater transition to go through. Despite rather small cultural differences I do have transnational way of living, where I try to follow news and national political debate in Sweden to understand the country I life in. However, some part of my life still happens in Iceland where family and friends live, and I find relief in turning on the Icelandic radio where I don’t have to listen, I just hear what is said. With better understanding of the Swedish language I also enjoy more and more the selection of great media production as well as conversation with friends in Sweden even though I have to listen more carefully. With close connection to Icelandic friends, living in Stockholm it is hard to deny how relieving it can be to speak your native language and connect on the mutual grounds, as members of Iceland’s small population. Integration involves all kinds of steps and participation and who knows what forms my integration will take in the future; maybe I will one day be the chairman of the residence association (where I live).