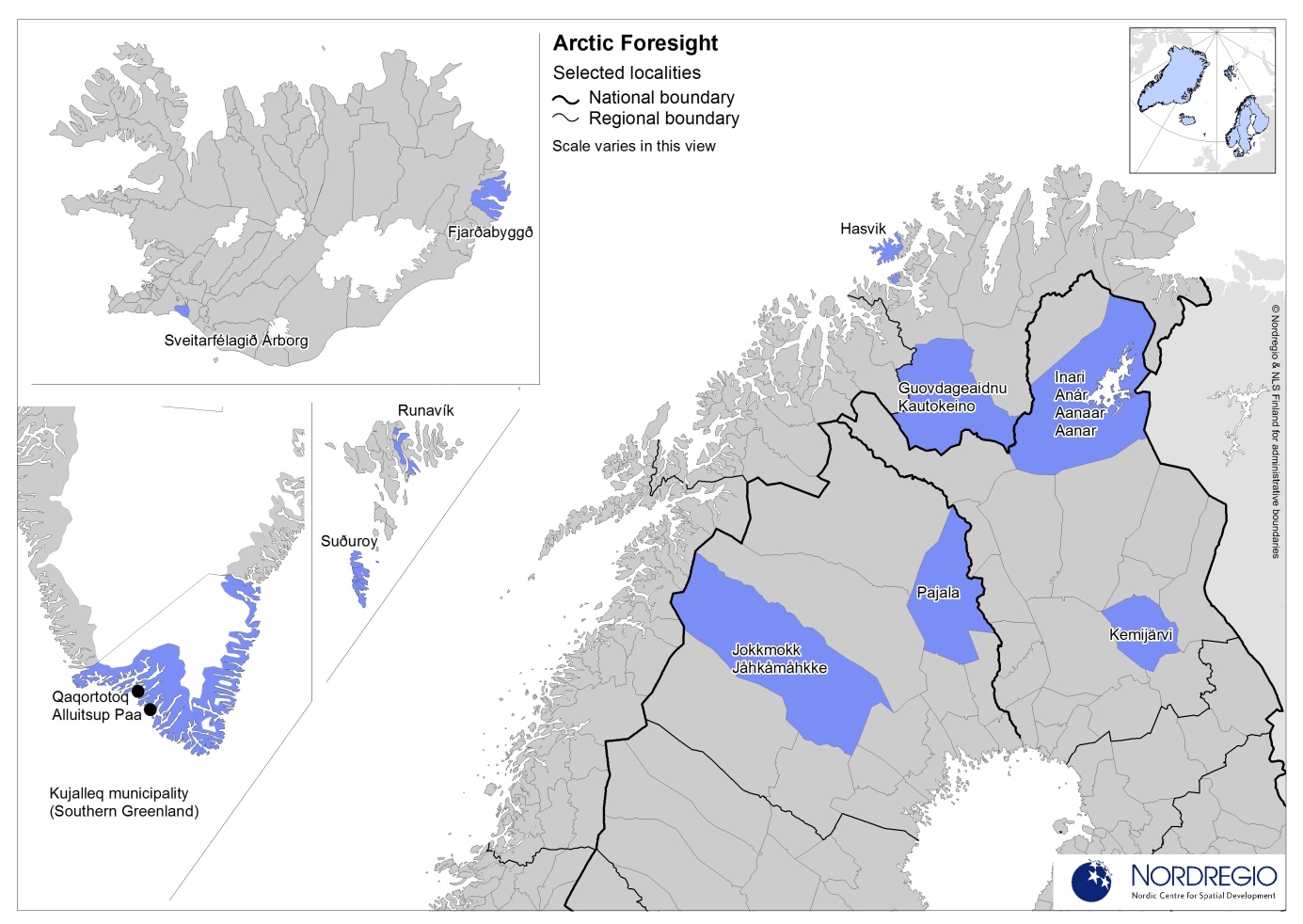 Foresight Workshops in the Nordic Arctic

The foresight project has comprised a workshop series of three steps: the vision phase, the realism phase, and the realisation phase.

First, in the vision phase, local workshops were organised in two selected local communities in each region of the Nordic Arctic with the participation of local inhabitants (a total of 12 workshops). Second, in the realism phase, dialogue was conducted at the regional/national level with a workshop that also included municipal, regional and national authority representatives (a total of six workshops). Finally, in the realisation phase, two transnational workshops were organised: one for members of the West Nordic Council and one for members of the North Calotte Council and other stakeholders in the cross-border region.

As quantitative background material for each of the Foresight workshops a series of maps displaying the current status and development over time in terms of demography, human resources and economy at local and regional level were produced. The maps were printed in full poster size and were used at all workshops to facilitate the discussions. These maps are included in the workshop summaries.

In the vision phase (September 2014 to February 2015) local communities’ visions for future development were formulated at 12 workshops across the Nordic Arctic. For each of the local foresight workshops the goal was to have 15 to 20 participants, and that these would broadly represent the composition of the local community (different occupations, age groups, gender). Therefore in each community a local contact person was engaged to invite participants and to help Nordregio facilitate the workshop.

The purpose of the realism phase (August 2015 to November 2015) was to further concretise the ideas presented in the vision phase. For this purpose workshop participants discussed the development of policy measures to support future regional development with regard to issues particularly highlighted in the local workshops: infrastructure, business development and job creation, education and skills development, as well as cultural and social activities.

Participants in the realism phase included representatives from the local-level workshops, civil servants from local, regional and national level development authorities, education institutions, and business associations. To the extent possible, the local contact persons from the vision phase workshops also participated. In most cases the workshops were co-hosted by the national member of the Nordic Working Group and Nordregio. The goal was to have 15-20 participants at each workshop.

In the realisation phase (January 2016 to March 2016), two transnational workshops were organised, one for members of the West Nordic Council and one for members of the North Calotte Council and other representatives from the cross-border region. The workshops were co-organised by respectively the West Nordic Council, the North Calotte Council and Nordregio. The purpose of the transnational workshops was to continue the discussions from the realism phase with a focus on transnational collaboration. Thematic discussions focused on infrastructure, business development and job creation, education and skills development.