A geographer specialised in:

Heleniak, Timothy, ‘The Wary Welcome: Migration and Diversity in the Nordic Countries’, pp. 40-60, In Which Direction is Finland Evolving? The Dynamics of Mobility and Migration. X Migration Symposium 2019, Migration Institute of Finland, December 2020.

Sánchez Gassen, Nora and Timothy Heleniak, The Nordic Population in 2040 – Analysis of past and future demographic trends, Nordregio Report 2019:6, June 2019.

Sánchez Gassen, Nora and Timothy Heleniak, Scenarios for 2015-2080: The impact of migration on population and ageing, Nordregio Policy Brief 2016:3, October 2016.

Heleniak, Timothy, “The Evolution of Russian Migration Policy in the Post-Soviet Period”, Migration in an Era of Restriction and Recession: Sending and Receiving Nations in a Changing Global Environment, Springer International Publishing, 2016.

Back to the Future: The Nordic Museum in Seattle

I was born and raised in Seattle, Washington, long before Starbucks, Microsoft and Amazon were founded and before Seattle became a trendy (and expensive) place to live. Each time I return, I am amazed and somewhat appalled, by those at both ends of the income spectrum. The number of wealthy persons in Seattle is amazing but the levels of poverty and homelessness are truly sad. I left Seattle the day I finished my undergraduate degree for Washington, DC with the plan to work for the federal government for a few years before returning. It was only later that I would learn that there is “nothing as permanent as a temporary migration.”

I’m dating myself when I say that I first started working for the Soviet Branch of the U.S. Census Bureau. There, we did economic, demographic, and geographic analysis of the then-Soviet Union. It was during the 1980s that I made my first of many trips to the Russia/Soviet Union allowing me an interesting benchmark glance into the country before the rapid social, economic, and political changes of the 1990s.

I then moved to the World Bank when it found itself with a need for expertise on the Russian economy, society, and statistics who also spoke Russian. I was able to travel extensively to many parts of Russia during this period, a true treat for a geographer. This included my first travels to my favourite region of Russia – the Arctic – which had long been an interest of mine.

Upon leaving the World Bank, I worked for two year at Innocenti Research Centre United Nations Children’s Fund in Florence, Italy, doing analysis of children’s issues in the countries of the former Soviet Union and Eastern Europe. I then returned to the U.S. in order to complete my PhD in geography. I continued work on migration and development issues in the Arctic supported by several grants and as a consultant to different international organizations.

According to data from the U.S. Census Bureau, the average American moves 11 times during their life. However, this average includes many people who make just a few moves over the course of their lives and people like me who has moved far more than 11 times. Stockholm and its lovely archipelago remind me very much of Seattle’s Puget Sound and all its gorgeous islands. Thus, in some ways, moving to Nordregio and Stockholm feel like a return home.

I have been working at Nordregio and living in Stockholm since August 2015. Since then, I have returned to my hometown of Seattle, Washington in the Pacific Northwest about once a year. During a recent visit, I went to the newly-renovated National Nordic Museum, which is located in Ballard, a destination of any many migrants from the Nordic countries during the early twentieth century. The museum was re-opened in 2017, by among others, Dagfinn Høybråten, the-then Secretary-General of the Nordic Council of Ministers. The wonderful museum contains three sections – immigration from the Nordic countries to the United States, the contribution of these migrants to the economic and cultural life of Washington State, and the Nordic model. If you get a chance, I would highly recommend a visit to Seattle and the wonderful Nordic Museum. 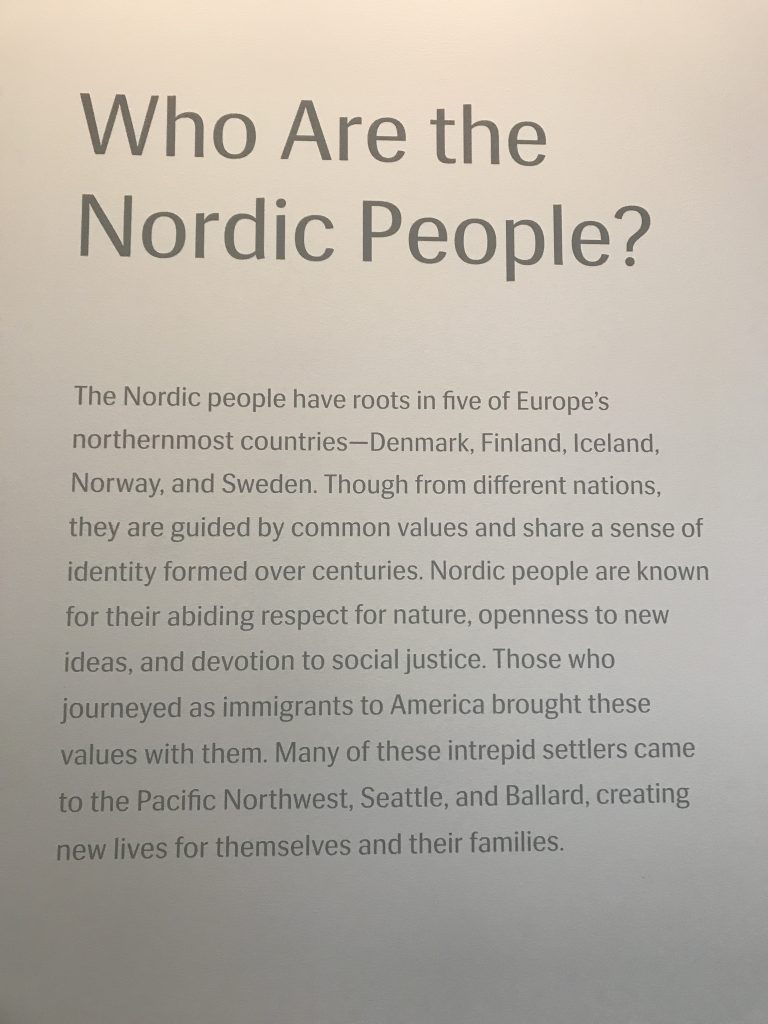